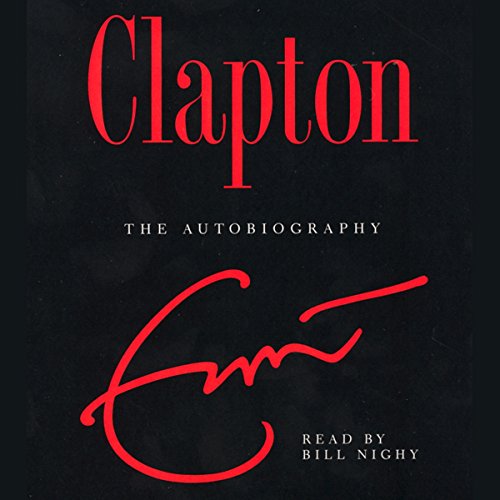 Eric Clapton is far more than a rock star. Like Dylan and McCartney, he is an icon and a living legend. He has sold tens of millions of records, played sell-out concerts all over the world, and been central to the significant musical developments of his era. His guitar playing has seen him hailed as "God". Tracks such as "Layla", "Sunshine of Your Love", "Wonderful Tonight", and "Tears in Heaven" have become anthems for generations of music fans. Now, for the first time, Eric tells the story of his personal and professional journeys in this pungent, witty, and painfully honest autobiography.

Eric was born illegitimate in 1945 and raised by his grandparents. He never knew his father, and until the age of nine believed his absentee mother to be his sister. In his teens his solace was the guitar, and he soon became a cult hero in the club circuits of Britain. With the foundation of the world's first super-group, Cream, in 1966, he became a world superstar.

But the rock-star lifestyle has had a darker side. In more than 40 years at the forefront of his profession, he has twice survived near fatal addictions to drugs and alcohol, the death of his four-year-old son, the deaths of friends such as Jimi Hendrix and John Lennon, the break-up of marriage, and the disintegration of relationships with a succession of beautiful women.

These are the memoirs of a survivor, someone who has reached the pinnacle of success, who has had it all, but whose demons have never left him. At the age of 62, Eric is now ready to tell his story as it is, hiding nothing, with a directness and searing honesty that will make this book one of the most compelling memoirs of our time.

"Both the youthful excesses and the current calm state are narrated with an engaging tone that nudges Clapton's story ahead of other rock 'n' roll memoirs." ( Publishers Weekly)