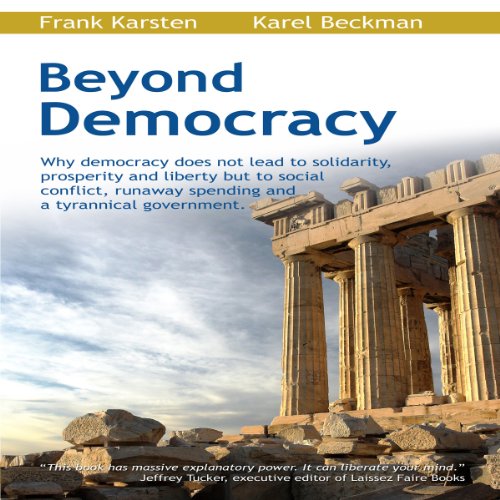 Do you wonder why government keeps growing bigger and the public debt keeps getting higher, while your freedom and prosperity look ever more threatened? After reading his book, you won't wonder anymore - you'll know why it is happening and what can be done about it.

Beyond Democracy is a groundbreaking and fascinating book for everyone who wants to better understand current social problems and the economic crisis. Widely considered to be the best political system imaginable, most people wrongly assume that the only alternative to democracy is a dictatorship or some type of oligarchy. It is no exaggeration to say that democracy has become a secular religion. It is perhaps the largest political faith on earth. To criticize the democratic ideal is to risk being regarded an enemy of civilized society. Yet that is precisely what Karel Beckman and Frank Karsten propose to do.

In this provocative and highly readable book, they tackle the last political taboo: the idea that our salvation lies in democracy. With simple, straightforward arguments they show that democracy, in contrast to popular belief, does not lead to freedom, civilization, prosperity, peace, and the rule of law, but the opposite: to loss of freedom, social conflict, runaway government spending, a lower standard of living and the subversion of individual rights. They debunk 13 great myths with which democracy is usually defended. What is more, they offer an appealing alternative: a society based on individual freedom and voluntary social relations.

More information can be found about this thought provoking book at: beyonddemocracy.net