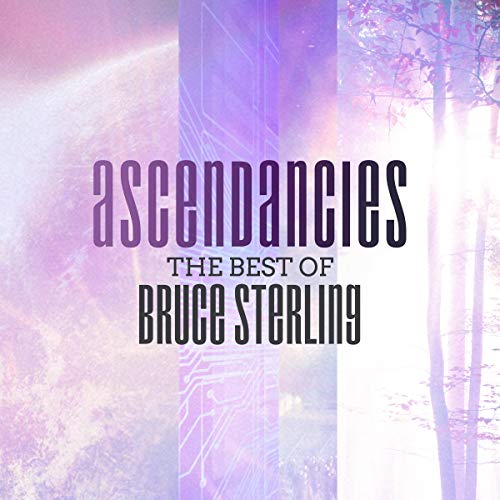 Time magazine describes Bruce Sterling as “one of America’s best-known science fiction writers and perhaps the sharpest observer of our media-choked culture working today in any genre.” Sterling’s abilities are on full display in Ascendancies, a collection of speculative fiction from a world-class world-building futurist, alternate historian, and mad prophet operating at the peak of his extraordinary powers. Here are twenty-four stories that span the illustrious career of the author who, along with William Gibson and Neal Stephenson, injected the word cyberpunk into the science fiction lexicon. These tales not only traverse galaxies and employ mind-boggling technologies, they also cut back across the centuries into a richly imagined past with style and a sharp satiric edge.

Sterling’s unparalleled imagination and courageous originality carry the reader into the future universe of the warring Shapers and Mechanists, rival sects of exiled humanity with radically opposed views of human augmentation. Several stories feature the questionable adventures of the footloose con man Leggy Starlitz in a somewhat-skewed and still-dangerous post-Cold War world.

Sterling explores the cyberpunk trope of technology gone wild and the resultant decline of civilization with appropriate gravity, while presenting parables of strangers stuck in very strange lands in a more whimsical vein. Whether chronicling an alien’s encounter with Crusaders in disputed Palestine, depicting the discovery of the key to immortality in a nineteenth-century Times Square magic shop, or portraying bicycles and bad guys in a near-future Tennessee, Sterling’s stories are smart, surprising, genre bending, bold, and outstanding, one and all.

“The godfather of cyberpunk demonstrates his full range, from far future to forgotten past, in this well-stocked career-spanning collection of his finest SF pieces.... Readers who like a hard-eyed view of the future combined with a wry wink at the past, with a few inventive postmodern narrative kicks mixed in, will be greatly rewarded.” (Publishers Weekly, starred review)

“Sterling’s speculative fiction dazzles from the get-go, bombarding the reader with one extraordinary concept after another.... This significant retrospective of Sterling’s career reveals a prescience that is bold and astounding.” (Booklist)

“Sterling is a writer of excellent fineness. In point of fact, I am somewhat awed by his abilities.” (Harlan Ellison)