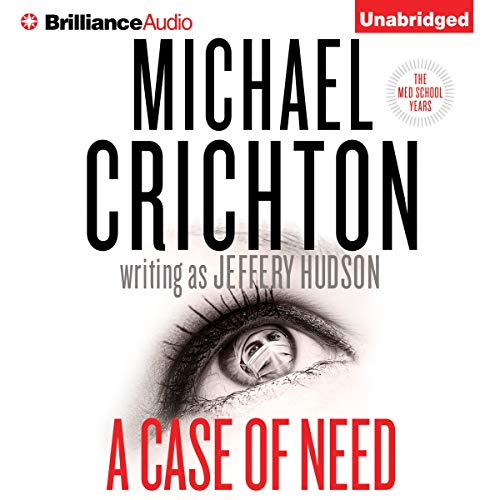 A Case of Need

The death of a doctor’s daughter may be malpractice - or murder - in this novel by a #1 New York Times-bestselling author: “I loved it” (Stephen King).

In the tightly knit world of Boston medicine, the Randall family reigns supreme. When heart surgeon J. D. Randall’s teenage daughter dies during a botched abortion, the medical community threatens to explode. Was it malpractice? A violation of the Hippocratic Oath? Or was Karen Randall murdered in cold blood?

The natural suspect is Arthur Lee, a brilliant surgeon and known abortionist, who has been carrying out the illegal procedure with the help of pathologist John Berry. After Karen dies, Lee is thrown in jail on a murder charge, and only Berry can prove his friend wasn’t the one who wielded the scalpel. Behind this gruesome death, Berry will uncover a secret that would shock even the most hardened pathologist.

An Edgar Award-winning novel by the author of such blockbusters as The Andromeda Strain and Jurassic Park - and creator of the long-running NBC drama ER - A Case of Need is a “superb” medical-thriller mystery (Los Angeles Times).

Story ok. Speaker... the wort yet

Was genau hat Sie an A Case of Need enttäuscht?

The speaker was absolutely horrible. This was perhaps the worst experience in an Audiobook I have ever had. The way the speaker portrayed different characters was unwillingly comical, everything was over-acted, at times it felt completely silly and cartoonish to the point of being unbearable.

Michael Crichton always wrote great books. This one lacked depth in the right spots, and led us down an extremely long string of new characters. Each chapter introduced us to the next person, and the next, and the next...

The speaker was unnatural and annoying. Over-affected and horribly cheesy.

I case of wasted money.