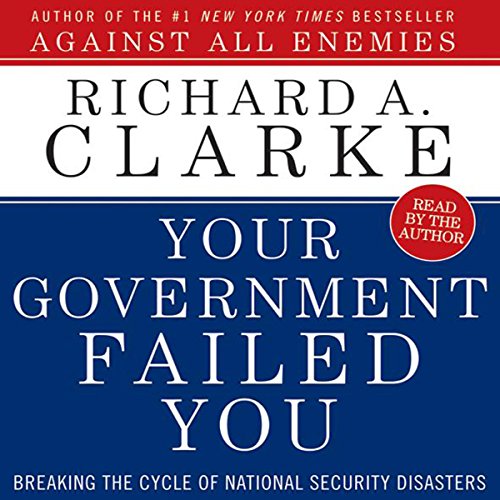 Your Government Failed You

The title of this book is from the riveting opening words of the author's testimony before the 9/11 Commission. Richard Clarke, ex-White House anti-terror advisor under Clinton and Bush II, details the many ways the current Administration, and former ones, have failed the American people. Using his insider knowledge from over thirty years of government service, Clarke explores such systemic failures as Medicare, Hurricane Katrina, and the War in Iraq, to name but a few. One of the most interesting features of his discussion is that he also offers strategies for repairing this all-but-broken system. Clarke not only writes well, he is an outstanding narrator. His delivery style is as clear, brisk, and emphatic as his writing. The result is a totally successful package.

Richard Clarke's statement to the 9-11 families that "Your government failed you - and I failed you" was the most dramatic moment in the 9-11 Commission hearings. His number-one best seller, Against All Enemies: Inside America's War on Terror, explained how the U.S. had stumbled into a struggle with violent Islamist extremists.

Now, in Your Government Failed You, Clarke looks at why failures have continued and how America and the world can succeed against the terrorists.

But Clarke goes beyond terrorism to examine the recurring U.S. government disasters. Despite the lessons of Vietnam, we've gotten involved in Iraq. A trail of intelligence failures litter the Washington landscape. From Katrina to color codes and duct tape, homeland security has been an oxymoron. Why does the Superpower continue to hobble national security?

Drawing on his 30 years in the White House, Pentagon, State Department, and Intelligence Community, Clarke discovers patterns in the failure and suggests ways to stop the cycle.