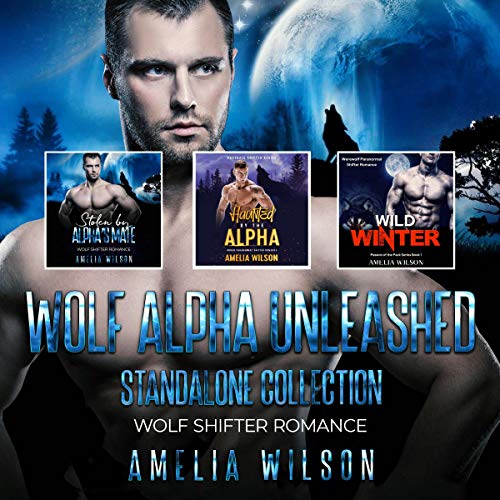 I never expected a night of drinking to end in blood and werewolves.

I never expected any of it - not being pimped out by a deranged alpha to repopulate their pack or to be seeking help from an overly serious, overtly sexy scarred stranger who just so happens to be a werewolf himself.

I don’t have a choice but to trust him, but trusting him shouldn’t involve being so drawn to him. Why can’t I stop? He said he had been alive for over 70 years and that was just in passing, so how can I trust that he isn’t using me for his own nefarious schemes that I haven’t found yet?

Why would he help a random human that he stumbled upon anyways?

He’s a lone werewolf who stumbled upon his true mate in a cage. She’s a flighty junior in college who was only ever interested in sparkly fantasy. Are you ready to run with them through forests, lust, and intrigue? Are they ready to face each other and that war-fractured pack chasing them for her fertility?

Haunted by the Alpha

A hungry shifter is on the hunt.... Will you be his prey?

A rivalry between witches and wolves...

An alpha-to-be with a dark past...

A hopeful witch with uncertain power...

And the fire ready to consume them all...

Aurora and Beckett both have something to prove, with Aurora yearning to join an exclusive coven, and Beckett seeking to protect what his pack once cherished. But something deep underground has been awakened, an unrelenting force seeking its revenge on Eastdale City. This whirlwind sweeps Beckett and Aurora from their rivaling factions and into each other’s arms, creating an innocent spark that flares into a forbidden flame.

Can they brace themselves against the storm? Or, will it claim much more than their fragile romance?

When a young woman is exposed to a wild world she never knew existed, her life is on the line as she becomes the target for a crazed killer.

Sasha finds herself caught in the middle of a wolf-pack war. She’s moved to Tall Tree Alaska to take care of her grandfather, but two handsome men who can both shapeshift into wolves have set their eyes upon her. One wants to love her, the other wants to kill her.

Hunter is a handsome man with a perfect smile and rockin’ body. Sasha wasn’t looking for love, but it looks like love found her. As Hunter shares his secret life with her, Sasha gets caught up in a battle between two wolves looking to take control of their pack.

Kurt is an evil man with an evil agenda, intent on taking over the pack, no matter who stands in his way. He sees Sasha as an easy target since Hunter has fallen for her, and he makes a play for both control of the pack, and Sasha’s life.

Will Sasha survive the wild wolf onslaught? And what other secrets could the men in her life be hiding from her?

Publisher's note: HEA guaranteed, no cheating. This book contains hot and steamy scenes. It’s for lovers of paranormal, urban fantasy, shape-shifters, contemporary, and, of course, spicy, sizzling, hot romance. Fans of The Originals TV series, Zoe Chant, Terry Bolryder, Harmony Raines, Kim Fox and T.S. Joyce may like this shape-shifter series. If such material offends you, do not buy this book.