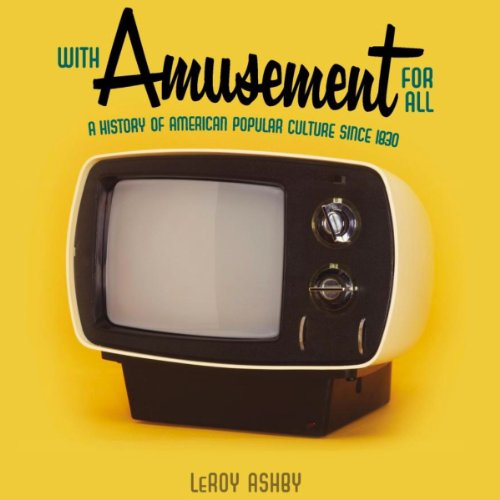 With Amusement for All

Popular culture is a central part of everyday life to many Americans. Personalities such as Elvis Presley, Oprah Winfrey, and Michael Jordan are more recognizable to many people than are most elected officials. With Amusement for All is the first comprehensive history of two centuries of mass entertainment in the United States, covering everything from the penny press to Playboy, the NBA to NASCAR, big band to hip hop, and other topics including film, comics, television, sports, dance, and music. Paying careful attention to matters of race, gender, class, technology, economics, and politics, LeRoy Ashby emphasizes the complex ways in which popular culture simultaneously reflects and transforms American culture, revealing that the world of entertainment constantly evolves as it tries to meet the demands of a diverse audience.

Mainstream entertainment has often co-opted and sanitized fringe amusements in an ongoing process of redefining the cultural center and its boundaries. Social control and respectability vied with the bold, erotic, sensational, and surprising, as entrepreneurs sought to manipulate the vagaries of the market, control shifting public appetites, and capitalize on campaigns to protect public morals. Rock 'n Roll was one such fringe culture; in the 1950s, Elvis blurred gender norms with his androgynous style and challenged conventions of public decency with his sexually-charged performances. By the end of the 1960s, Bob Dylan introduced the social consciousness of folk music into the rock scene, and The Beatles embraced hippie counter-culture. Don McLean's 1971 anthem "American Pie" served as an epitaph for rock's political core, which had been replaced by the spectacle of hard rock acts such as Kiss and Alice Cooper. While Rock 'n Roll did not lose its ability to shock, in less than three decades it became part of the established order that it had originally sought to challenge.

With Amusement for All provides the context to what Americans have done for fun since 1830, showing the reciprocal nature of the relationships between social, political, economic, and cultural forces and the way in which the entertainment world has reflected, refracted, or reinforced the values those forces represent in America.

The book is published by University Press of Kentucky.

"A masterpiece. The book is a tour de force in its field and has made popular culture, once thought to be a frivolous area for academic study, a serious field of inquiry." ( USA Today)
"No single author has tackled popular culture with so much breadth and depth and managed to strike a balance between the popular and scholarly approaches. Ashby's absorbing and hugely informative study will appeal to a wide audience. Highly recommended." ( Library Journal)
"A survey of impressive breadth on two centuries of American amusements." ( Journal of American History)

Das sagen andere Hörer zu With Amusement for All