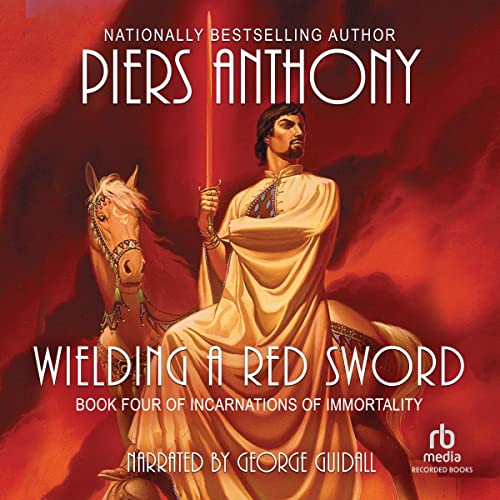 Legendary science-fiction/fantasy writer Piers Anthony combines fascinating magic with a gripping struggle between good and evil in this most ambitious series. As with the series' other stand-alone novels, Wielding a Red Sword depicts a mere mortal who is called to serve as a god-like incarnation. It is the thrilling story of Mym, an Indian prince who takes up the Red Sword to become Mars, the Incarnation of War.

To avoid breaking his betrothal to the princess Rapture and the war that would surely result, Mym accepts the fearsome office. As Mars, he plans to keep Rapture by his side as he stops the suffering caused by Earth's incessant wars. But will Mym's princely training, even his abilities as a berserker, be enough to defeat Satan himself?

Piers Anthony weaves together adventure, romance, and Eastern and Western mythologies to create this charming allegory. Master narrator George Guidall delivers the elegant tale with a dignified tone and much dramatic flair.