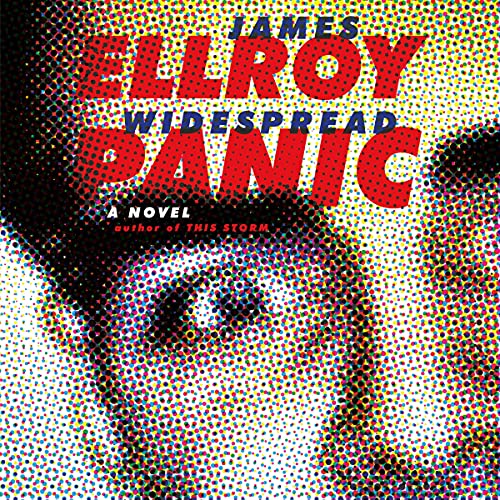 From the modern master of noir comes a novel based on the real-life Hollywood fixer Freddy Otash, the malevolent monarch of the 1950s LA underground, and his Tinseltown tabloid Confidential magazine.

Freddy Otash was the man in the know and the man to know in '50s LA. He was a rogue cop, a sleazoid private eye, a shakedown artist, a pimp - and, most notably, the head strong-arm goon for Confidential magazine.

“I’m consumed with candor and wracked with recollection. I’m revitalized and resurgent. My meshugenah march down memory lane begins NOW.”

In Freddy’s viciously entertaining voice, Widespread Panic torches 1950s Hollywood to the ground. It’s a blazing revelation of coruscating corruption, pervasive paranoia, and of sin and redemption with nothing in between.

Here is James Ellroy in savage quintessence. Freddy Otash confesses - and you are here to read and succumb.

“Widespread Panic is quintessential Ellroy, but with enough alliteration, Hollyweird flavor, booze, distressed damsels, communist conspiracies, and extortion to make this the most Ellroy novel he's ever written.... Wildly entertaining and memorable.... Otash's voice is unlike anything else in contemporary fictio.... A spiritual companion to L.A. Confidential.” (NPR)

“There is here, as in Ellroy’s other novels, so fully researched and plausible an evocation of the world about which he writes, so deft an intermingling of the real and fictional characters that the novelist asks the reader to believe that these events could have happened, and that some of them (Jack Kennedy’s exhaustive and exhausting philandering, for example) probably did. This commingling of fact and fiction is, of course, the basis upon which the myths of Hollywood, and hence, at this point, those of our broader American culture, rest.” (Claire Messud, Harper's Magazine)

“Widespread Panic unfolds in shimmering Ellroyvision. In recounting his sinful past, Freewheeling Freddy mainlines the repetitive rhumba of his scandal sheet until it’s become the mother’s milk of his speech and psyche, and he bops to alliteration’s alluring algorithm.” (Tom Nolan, The Wall Street Journal)