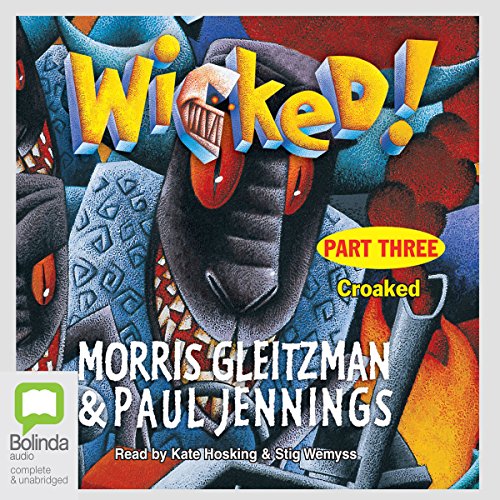 Kids in grades four through six will seize upon the irresistible qualities of Wicked!, a six-part novel collection that aims to blend comedy, horror, and emotional authenticity in a zany world where Dawn and Rory's step-sibling rivalry meets bone-sucking "Slobberers". In Croaked, the third book of the collaborative series by award-winning Australian authors Paul Jennings and Morris Gleitzman, freaky fantasies and hilarious gross-outs get equal billing. Kate Hosking and Stig Wemyss alternate the audio performance, each bringing a gushing pace and a high-spirited Australian accent to their respective characters. Listeners hear Dawn and Rory's differences dissolve as they team up to battle their common enemy.

"Charge!" came Gramps' excited voice. I gasped. The frog general was as big as a full-grown cow. He started to roll his tongue back into his mouth. He was going to slurp me up and slide me down his throat.

Thwack. The frog's tongue cracked out like a giant whip. "Now," I screamed to Gramps. "Fire!"

It's wicked how it grabs you. And it's to be continued....