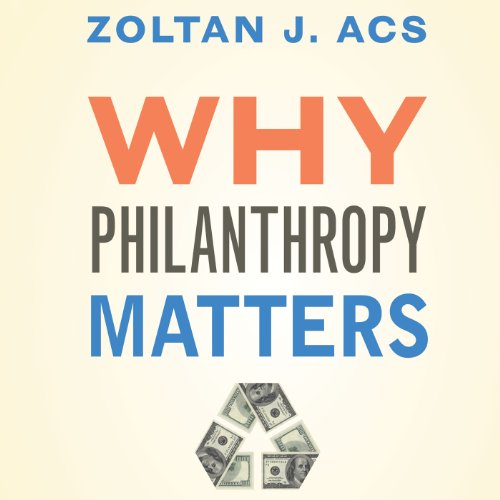 Philanthropy has long been a distinctive feature of American culture, but its crucial role in the economic well-being of the nation - and the world - has remained largely unexplored. Why Philanthropy Matters takes an in-depth look at philanthropy as an underappreciated force in capitalism, measures its critical influence on the free-market system, and demonstrates how American philanthropy could serve as a model for the productive reinvestment of wealth in other countries. Factoring in philanthropic cycles that help balance the economy, Zoltan Acs offers a richer picture of capitalism, and a more accurate backdrop for considering policies that would promote the capitalist system for the good of all.

Examining the dynamics of American-style capitalism since the eighteenth century, Acs argues that philanthropy achieves three critical outcomes. It deals with the question of what to do with wealth - keep it, tax it, or give it away. It complements government in creating public goods. And, by focusing on education, science, and medicine, philanthropy has a positive effect on economic growth and productivity. Acs describes how individuals such as Benjamin Franklin, Andrew Carnegie, Bill Gates, and Oprah Winfrey have used their wealth to establish institutions and promote knowledge, and Acs shows how philanthropy has given an edge to capitalism by promoting vital forces - like university research - necessary for technological innovation, economic equality, and economic security. Philanthropy also serves as a guide for countries with less flexible capitalist institutions, and Acs makes the case for a larger, global philanthropic culture.

Providing a new perspective on the development of capitalism, Why Philanthropy Matters highlights philanthropy's critical links to the economic progress, health, and future of the United States - and beyond.