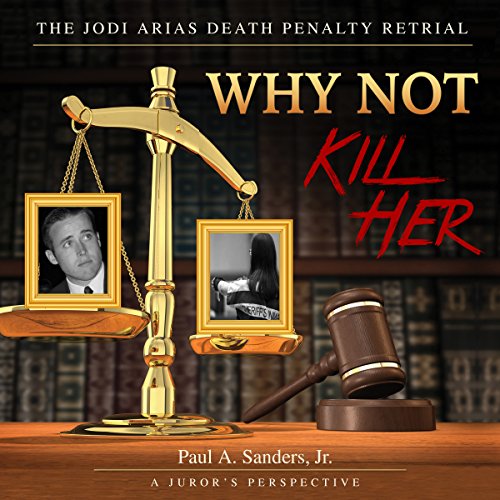 Why Not Kill Her: A Juror's Perspective

On June 4, 2008, at approximately 5:30 p.m. in a quiet suburb of Phoenix, Arizona, Jodi Arias stabbed Travis Alexander 29 times, cut his throat, and then shot him in the head. The killer then went to great lengths to cover up the crime, including sending his grandmother flowers, going to the memorial service, driving by the victim's house, and calling the lead investigator, Detective Esteban Flores.

It would take five years before the case would be put in front of a second jury and leave them to decide whether Arias was a cold, calculating killer or the victim of extreme domestic violence at the hands of an abusive boyfriend.

Paul Sanders sat in the public gallery for each and every one of the 47 days of the trial, and took extensive notes, transposing every twist and turn of it to social media every night. With allegations of pornography, racial slurs, and a search for the answer to the question of domestic violence and alleged child abuse, the journey is both painful and meticulous.

Humbling, intimidating, and powerful at the same time, this trial would test the jurors in ways they could never have foreseen, in their ultimate search for truth and justice.

Das sagen andere Hörer zu Why Not Kill Her: A Juror's Perspective