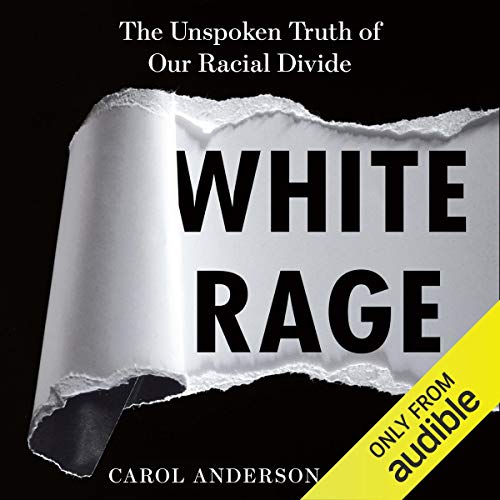 As Ferguson, Missouri, erupted in August 2014, and media commentators across the ideological spectrum referred to the angry response of African Americans as 'black rage', historian Carol Anderson wrote a remarkable op-ed in the Washington Post showing that this was, instead, 'white rage at work. With so much attention on the flames,' she wrote, 'everyone had ignored the kindling.'

Since 1865 and the passage of the Thirteenth Amendment, every time African Americans have made advances towards full participation in our democracy, white reaction has fueled a deliberate and relentless rollback of their gains. The end of the Civil War and Reconstruction was greeted with the Black Codes and Jim Crow; the Supreme Court's landmark 1954 Brown v. Board of Education decision was met with the shutting down of public schools throughout the South while taxpayer dollars financed segregated white private schools; the Civil Rights Act of 1964 and Voting Rights Act of 1965 triggered a coded but powerful response, the so-called Southern Strategy and the War on Drugs that disenfranchised millions of African Americans while propelling presidents Nixon and Reagan into the White House.

Carefully linking these and other historical flashpoints when social progress for African Americans was countered by deliberate and cleverly crafted opposition, Anderson pulls back the veil that has long covered actions made in the name of protecting democracy, fiscal responsibility, or protection against fraud, rendering visible the long lineage of white rage.

Compelling and dramatic in the unimpeachable history it relates, White Rage will add an important new dimension to the national conversation about race in America.

"Narrator Pamela Gibson perfectly conveys the insightful research and writing in this book about civil rights in the U.S. by an Emory University historian. Anderson contends that when African-Americans make even the slightest progress, a subtle, almost invisible, white rage in the form of opposition reverses what little progress has been made. An example is the current suppression of black votes under the guise of voter fraud prevention. Gibson's delivery registers rage and compassion where appropriate. No one - from Lincoln to Trump - escapes criticism. Hard truths and supporting citations are clearly stated, leaving no confusion for listeners. Also, Gibson ably presents Anderson's unexpected humor, for example, when she talks about the current paralysis of the U.S. Senate." ( AudioFile magazine)