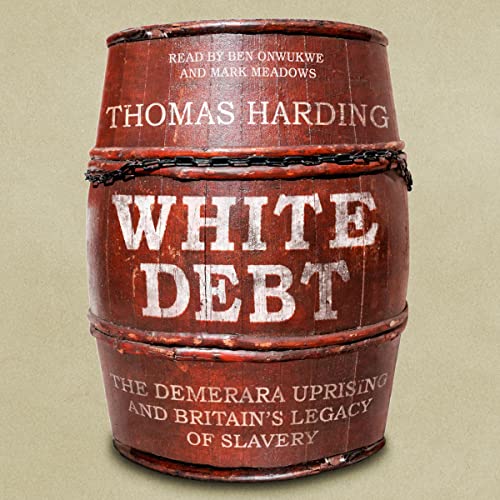 When Thomas Harding discovered that his mother's family had made money from the slave plantations worked by people of African descent, what began as an interrogation into the choices of his ancestors soon became a quest to learn more about Britain's role in slavery. It was a history that he knew surprisingly little about - the myth that we are often taught in schools is that Britain's role in slavery was as the abolisher, but the reality is much more sinister.

In White Debt, Harding vividly brings to life the story of the uprising by enslaved people that took place in the British colony of Demerara (now Guyana) in the Caribbean in 1823. It started on a small sugar plantation called 'Success' and grew to become a key trigger in the abolition of slavery across the empire. We see the uprising through the eyes of four people: the enslaved man Jack Gladstone, the missionary John Smith, the colonist John Cheveley and the politician and slaveholder John Gladstone, father of a future prime minister. Charting the lead-up to the uprising right through to the courtroom drama that came about as a consequence, through this one event we see the true impact of years of unimaginable cruelty and incredible courage writ large.

Captivating, moving and meditative, White Debt combines a searing personal quest with a deep investigation of a shared history that is little discussed amongst white people. It offers a powerful rebuttal of the national amnesia that masks the role of the British in this devastating period and asks vital questions about the legacy we have been left with - cultural, political and moral - and whether future generations of those who benefitted from slavery need to acknowledge and take responsibility for the white debt.