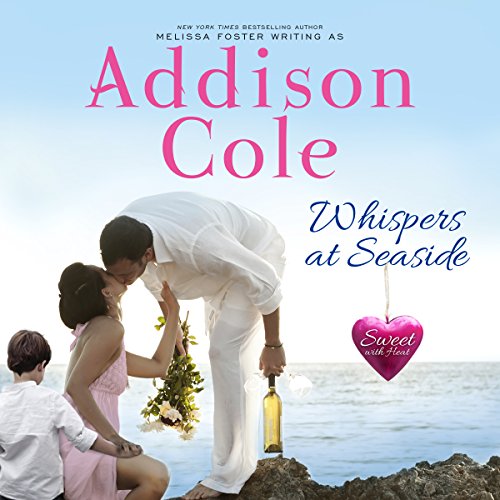 Sweet with Heat: Seaside Summers features a group of fun, flirty, and emotional friends who gather each summer at their Cape Cod cottages. They're sassy, flawed, and so easy to relate to, you'll be begging to enter their circle of friends!

Whispers at Seaside by Addison Cole is the sweet edition of The New York Times best-selling author Melissa Foster's steamy romance novel, Seaside Whispers. The story conveys all of the passion you expect between two people in love, without any explicit scenes or harsh language.

Having a mad crush on her boss’s son, Matt Lacroux - an intriguing mix of proper gentleman and flirtatious bad boy - is probably not the smartest idea for single mother Mira Savage. Especially when the company and her job, is already on shaky ground. But as a Princeton professor, Matt’s life is hours away from Mira’s home on Cape Cod, keeping him safely in the fantasy-only zone. And as a single mother to six-year-old Hagen, with a floundering company to save, fantasies are all she has time for.

With hopes of becoming dean off the table, and too many months of longing for a woman who lived too far away to pursue, Matt’s publishing contract couldn’t have come at a better time. He heads home to Cape Cod on a brief sabbatical, intent on starting his book and finally getting his arms around sweet, beautiful Mira.

A surprise encounter leads to midnight confessions. The more time Matt and Mira spend together, the deeper their relationship grows, and the love and attention Matt showers on Hagen is more than she has ever dreamed of. But Matt’s sabbatical is only temporary, and Mira’s not saving his father’s company, so she can leave it behind. Will their whispers of love be enough for one of them to change their life forever?

Addison Cole is the sweet alter ego of The New York Times and USA Today best-selling and award-winning author Melissa Foster. She writes humorous and emotional sweet contemporary romance. Her books do not include explicit sex scenes or harsh language. Addison spends her summers on Cape Cod, where she dreams up wonderful love stories in her house overlooking Cape Cod Bay.

Addison enjoys discussing her books with book clubs and groups and welcomes an invitation to your event.