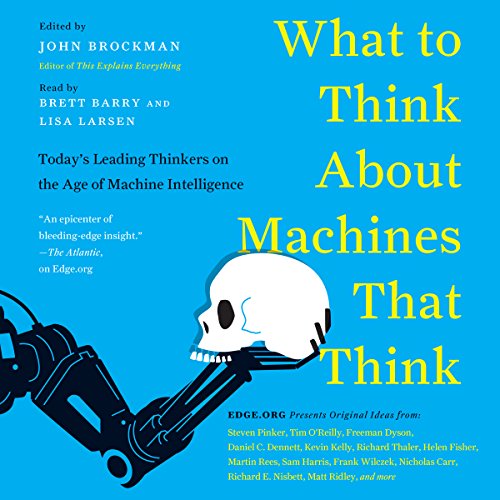 What Do You Think About Machines That Think?

As the world becomes ever more dominated by technology, John Brockman's latest addition to the acclaimed and best-selling Edge Question Series asks more than 175 leading scientists, philosophers, and artists: What do you think about machines that think?

The development of artificial intelligence has been a source of fascination and anxiety ever since Alan Turing formalized the concept in 1950. Today, Stephen Hawking believes that AI "could spell the end of the human race". At the very least, its development raises complicated moral issues with powerful real-world implications - for us and for our machines.

In this volume, recording artist Brian Eno proposes that we're already part of an AI: global civilization, or what TED curator Chris Anderson elsewhere calls the hive mind. And author Pamela McCorduck considers what drives us to pursue AI in the first place.

On the existential threat posed by superintelligent machines, Steven Pinker questions the likelihood of a robot uprising. Douglas Coupland traces discomfort with human-programmed AI to deeper fears about what constitutes "humanness". Martin Rees predicts the end of organic thinking while Daniel C. Dennett explains why he believes the Singularity might be an urban legend.

Provocative, enriching, and accessible, What Do You Think About Machines That Think? may just be a practical guide to the not-so-distant future.

Das sagen andere Hörer zu What Do You Think About Machines That Think?

By imperfection to insight

Every author in this book can only contribute his/her specific knowledge and perspective on the topic. The sum of these imperfections however deliver insights that surpass by far the monolithic books of the self-proclaimed or even acclaimed artificial intelligence pundits. It is indeed paradoxical that incompleteness delivers the more complete stories and a good indication that superintelligences could after all fail to produce the ultimate insight because their view on a subject is too deep to capture the reflections. Thus a book more than worthwhile to peruse and make its perspective even more rich by contributing your own vision.