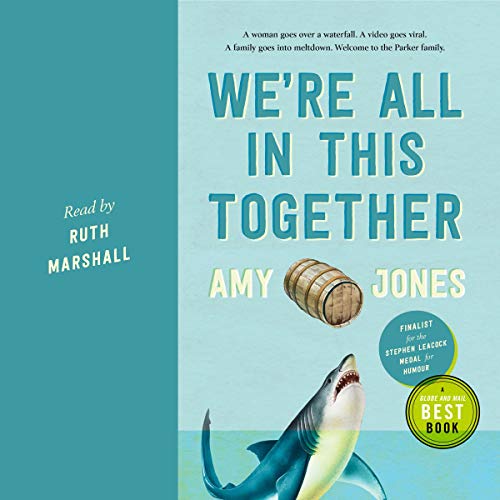 We're All in This Together

Finalist for the Leacock Medal for Humour

A woman goes over a waterfall, a video goes viral, a family goes into meltdown - life is about to get a lot more complicated for the Parker family.

Like all families, the Parkers of Thunder Bay have had their share of complications. But when matriarch Kate Parker miraculously survives plummeting over a waterfall in a barrel - a feat captured on a video that goes viral - it's Kate's family who tumbles into chaos under the spotlight.

Her prodigal daughter returns to town. Her 16-year-old granddaughter gets caught up in an online relationship with a man she has never met. Her husband sifts through their marriage to search for what sent his wife over the falls. Her adopted son fears losing the only family he's ever known. Then there is Kate, who once made a life-changing choice and now fears her advancing dementia will rob her of memories from when she was most herself.

Set over the course of four calamitous days, Amy Jones's big-hearted first novel follows the Parkers' misadventures as catastrophe forces them to do something they never thought possible - act like a family.

"In her exploration of family, and the 'many moments that cleave our lives in two,' Jones has created a novel of great psychological insight and a kind of sharp-edged tenderness that revels not in family dysfunction, but in its 'beautiful, crazy chaos.'" (Quill & Quire)

"We're All in This Together is a complicated laying of time shifts and perspectives, as each character takes their turn revealing their inner emotional lives and personal history." (Metro News)

"Jones has a clean and direct style, with flourishes that keep [the story] interesting and surprising." (Globe & Mail)

Das sagen andere Hörer zu We're All in This Together