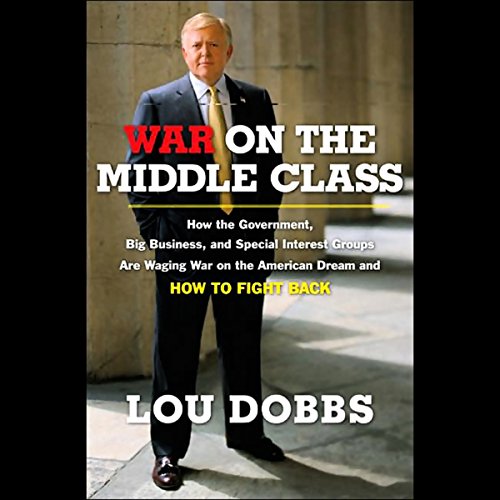 War on the Middle Class

Through his nightly CNN show Lou Dobbs Tonight, his syndicated radio program, and his monthly magazine column, Lou Dobbs has become one of America's most visible, popular, and respected voices on business and financial matters. Now, with War on the Middle Class, Dobbs takes an impassioned and rousing stance on the all-out class war that is turning the American dream into a nightmare.

The middle class has never been so vulnerable. Its every feature is under assault by politicians and the lobbyists who court them, corporations that send jobs overseas, and a media that relies on sensationalism instead of facts when reporting the news.

In a sweeping analysis, Dobbs looks at every aspect of the decline of the middle class, from a lack of political representation to America's corrupt health-care system. He demonstrates that the gap between America's newest haves and have-nots is not merely financial, but instead involves the erosion of education, employment, government, and community. Dobbs proposes a series of measures to resolve each issue and incite people, whose future is being mortgaged to benefit a powerful few, to preserve their rights and dreams.

War on the Middle Class is provocative, incendiary, and bound to be widely discussed; it's the perfect book to establish the terms of debate for future elections.

"His refreshing prose, like his on-air persona, combines seemingly unmixable ingredients [and] thanks to Dobbs' passion and charisma [War on the Middle Class] succeeds in sounding an alarm that cannot be ignored." (The New York Times Book Review)

"[Dobbs] manages to shine a powerful spotlight on many outrages." (Seattle Post-Intelligencer)