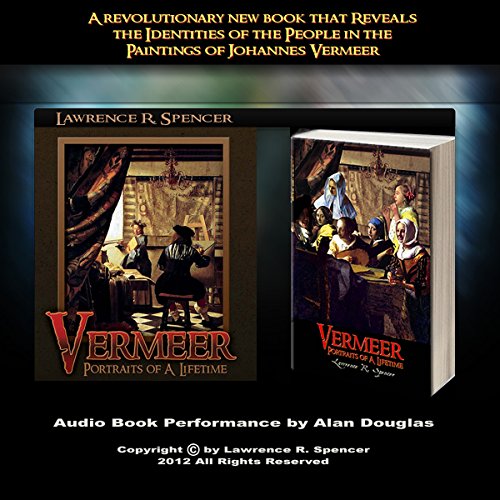 Vermeer: Portraits of A Lifetime is a revolutionary reexamination of the mystique and mythology surrounding the 17th Century Dutch Master painter, Johannes Vermeer. For the first time in over 300 years names of people who posed for his paintings are identified. An unknown portrait of Vermeer, painted by his friend, Gerard ter Borch, is exposed. This book is an empathetic retrospective, built on observations that reveal answers to dozens of speculations about his paintings, his wife, his daughters, and contemporaries who were the subjects of his art, and with whom he shared his brief life in Delft. The PDF version of this book includes full color plates of each of the remaining works of Vermeer. The paperback version contains black and white plates of each of his paintings. Researched and written by Lawrence R. Spencer, author and master oil painter who, without training, "remembered" how to paint at the age of 30.

The few existing paintings by Vermeer our priceless works of art, housed in the most prestigious art museums of the world. In July 2004 Vermeer's painting Young Woman Seated at the Virginals' was sold at auction for $42 million. The value of an undisputed Vermeer would likely exceed $100,000,000. The authenticity of Young Woman Seated at the Virginals is disputed which explains the relatively low sales price. Because the few authenticated Vermeers are all in museum collections , the only way to acquire a Vermeer is to steal one which happened in 1990. The Concert was stolen from the Isabella Stewart Gardner Museum in Boston and has not been recovered.