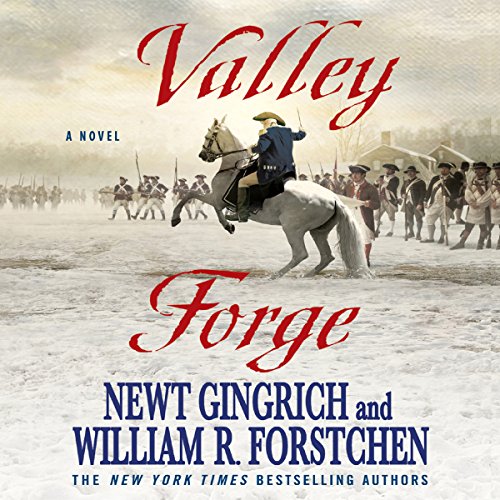 In To Try Men's Souls, Newt Gingrich and William R. Forstchen cast a new light on the year 1776 and the man who would become the father of our nation, George Washington. Valley Forge picks up the narrative a year after Washington’s triumphant surprise attack on Trenton, and much has changed since then. It’s the winter of 1777, and Washington’s battered, demoralized army retreats from Philadelphia. Arriving at Valley Forge, they discover that their repeated requests for a stockpile of food, winter clothing, and building tools have been ignored by Congress.

With no other options available, the men settle down for a season of agony. For weeks the dwindling army lives under tents in the bitter cold. Food runs out. The men are on the point of collapse, while in Philadelphia the British, joined by Allen van Dorn, the Loyalist brother of the dead patriot, Jonathan van Dorn, live in luxury.

In spite of the suffering and deceit, Washington endures all, joined at last by a volunteer from Germany, Baron von Steuben. Von Steuben begins the hard task of recasting the army as a professional fighting force capable of facing the British head-on - something it has never accomplished before - and in the process he will change the course of history.

Valley Forge is a tour-de-force about endurance, survival, transformation, and rebirth. Washington and his Continental Army, against all odds, will be forged into a fighting force that will win a revolution.