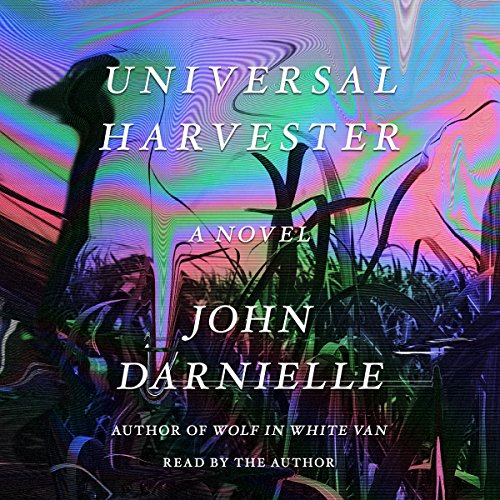 Jeremy works at the Video Hut in Nevada, Iowa. It's a small town in the center of the state - the first a in Nevada pronounced ay. This is the late 1990s, and even if the Hollywood Video in Ames poses an existential threat to Video Hut, there are still regular customers, a rush in the late afternoon. It's good enough for Jeremy: It's a job, quiet and predictable, and it gets him out of the house, where he lives with his dad and where they both try to avoid missing Mom, who died six years ago in a car wreck.

But when a local schoolteacher comes in to return her copy of Targets - an old movie, starring Boris Karloff, one Jeremy himself had ordered for the store - she has an odd complaint: "There's something on it," she says, but doesn't elaborate. Two days later a different customer returns a different tape, a new release, and says it's not defective, exactly, but altered: "There's another movie on this tape."

Jeremy doesn't want to be curious, but he brings the movies home to take a look. And indeed, in the middle of each movie, the screen blinks dark for a moment, and the movie is replaced by a few minutes of jagged, poorly lit home video. The scenes are odd and sometimes violent, dark, and deeply disquieting. There are no identifiable faces, no dialogue or explanation - the first video has just the faint sound of someone breathing - but there are some recognizable landmarks. These have been shot just outside of town.

So begins John Darnielle's haunting and masterfully unsettling Universal Harvester: the once placid Iowa fields and farmhouses now sinister and imbued with loss and instability and profound foreboding. The audiobook will take Jeremy and those around him deeper into this landscape than they have ever expected to go. They will become part of a story that unfolds years into the past and years into the future, part of an impossible search for something someone once lost that they would do anything to regain.

"Darnielle's understated narration is a perfect match for the quiet story. His restrained delivery highlights the steady Midwestern attitude of his characters, making the story's pensive strangeness that much more unsettling." ( AudioFile)

I love the Mountain Goats and I love listening to John Darnielle. I like his style of writing and I also like his style of narration, it's very soothing for me. This book isn't as captivating as Wolf in White Van, but I still enjoyed it. I could see why someone who isn't a fan of John and his work in the first place might not like it though.

Beware of the very misleading description

John Darnielle does a halfway decent job narrating his novel. But since he wrote this he should be able to narrate it properly. And since the performance is in no way outstanding three stars seem fair for that part of this review.
But this review is about the content, not so much the presentation. So let us dive in!

The description makes this book seem like some kind of horror novel, but it turns out to be some slow, boring and incoherent mess.
The book (you just cannot call it a story) starts just as the description states, so far, so good. After a whole while, and therefore after several passages that do not add anything to the plot (at this point you still think there is something resembling a plot) and assumedly are there for character description you will think: "Well, this sure is a slow burner."
And when something finally happens we enter part two, which is not at all connected to the narrative you where just following. Again you have quite some time of boring passages, during which you start to understand how this all connects to part one, and when the speed finally picks up and something interesting happens we jump back to the narrative of before and into part three. More boredom, more character description, more of whatever this is.
And again, when something finally happens we jump into part four. This part is about entirely different people that find the master tapes of the video scenes from the beginning of the book.
Sure, you get the connection, but in the end this all amounts to nothing.

After a while this book reminded me a lot of "The catcher in the rye". And considering who John Darnielle is he might feel honoured by this comparison. And quite a few people reading this might think this is high praise. But it is not, I despise "The catcher in the rye"! That book was boring, tedious and pointless, just as this book. And the prose, despite what some may say, us just nothing special. It's neither elegant nor especially authentic. This is true for both novels.

I did not know the Mountain Goats when I purchased this. Had I known them and therefore who Darnielle is and what his style is, I might have expected something strange like this book. But I went by the description alone and that was a grave mistake.
There is no proper suspense, no proper story arc, no proper resolution, no proper narrative.
If you liked "The catcher in the rye" and especially if you like the Mountain Goats this might be for you, otherwise just move along.
This book is a waste of time. Which is quite fitting, considering the videos this book revolves around where a waste of time as well.