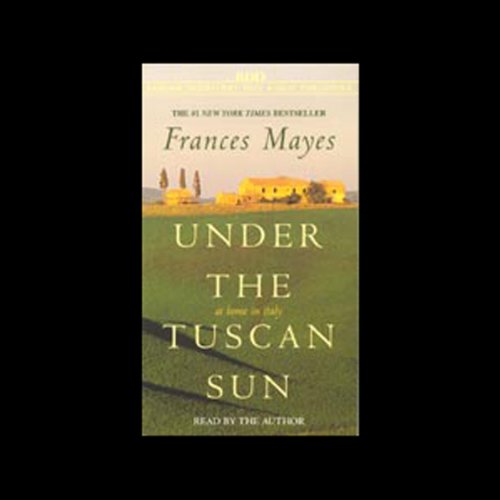 Under the Tuscan Sun

Under the Tuscan Sun

“This beautifully written memoir about taking chances, living in Italy, loving a house and, always, the pleasures of food, would make a perfect gift for a loved one. But it’s so delicious, read it first yourself.” (USA Today)

Twenty years ago, Frances Mayes - widely published poet, gourmet cook, and travel writer - introduced listeners to a wondrous new world when she bought and restored an abandoned villa called Bramasole in the spectacular Tuscan countryside. Under the Tuscan Sun inspired generations to embark on their own journeys - whether that be flying to a foreign country in search of themselves, savoring one of the book's dozens of delicious seasonal recipes, or simply being transported by Mayes's signature evocative, sensory language.

Now, with a new afterword from the Bard of Tuscany herself, the 20th anniversary edition of Under the Tuscan Sun brings us up-to-date with the book's most beloved characters.

"An intense celebration of what [Mayes] calls 'the voluptuousness of Italian life'...appealing and very vivid." ( The New York Times Book Review)
"Irresistible...a sensuous book for a sensuous countryside." ( Minneapolis Star-Tribune)

Rather slow and disappointing

Oooh, why did I watch the movie before reading the book?! That spoiled it for me.

And why did the author herself read the book - not a good choice at all. I thought that her strong Southern drawl and very slow pace did not really fit.

All in all, the story is slow, and remains slow, despite of the explanation of their achievements and their love for Italy, which I share.

And I only realized in the end that this was an abridged version. Not sure whether the longer version would have been better though.

I found this audio book rather disappointing, due to the reasons I quoted above.