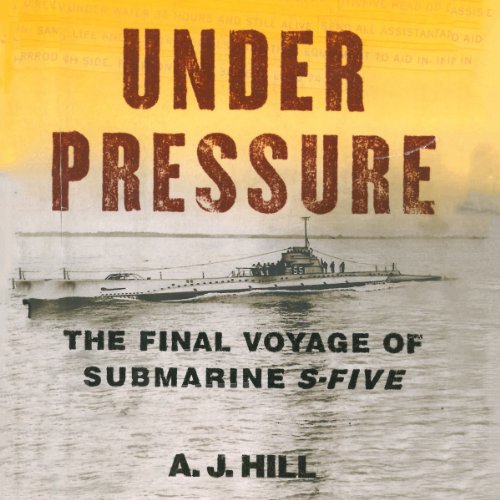 On August 30, 1920, the S-Five, the newest addition to the U.S. Navy's fleet of submarines, left Boston for Baltimore on her first cruise. Two days later, the crew commenced a practice "crash dive" but a combination of errors and poor mechanical design sent 75 tons of seawater charging inside. Narrator Michael Butler Murray's authoritative, well-paced performance builds a heart-pounding picture of the panic inside the submarine as she submerges to the ocean floor at a depth of 180 feet. Murray's pauses and emphasis on words intensify the drama and suspense as the crew scramble to save themselves as their air and water run out. Listeners won't be able to tear themselves away from this gripping true story.

Hanging on display in the United States Navy Yard in Washington, D.C., is a battered and scratched steel plate, two feet in diameter, edged with more than one hundred little semicircles. For more than 80 years, people have wondered how it came to be there and at the story it could tell.

Under Pressure: The Final Voyage of Submarine S-Five is that story. On Monday, August 30, 1920, the S-Five, the newest member of the U.S. Navy's fleet of submarines, departs Boston on her first cruise - to Baltimore for a recruiting appearance at the end of the week. Two days later, as part of a routine test of the submarine's ability to crash dive, her crew's failure to close a faulty valve sends 75 tons of seawater blasting in. Before the valve can be jury-rigged shut, the S-Five sits precariously on the ocean floor under 180 feet of water.

The salt in the seawater combines with the sulfuric acid in the sub's batteries to create a cloud of chlorine gas. They have little air, no water, and only the dimmest of light by which to plan their escape. By shifting the water in the sub toward the bow torpedo room, the crew is able to stand the 240-foot-long sub on its nose, bringing it close to vertical, and, using trigonometry, he calculates that at least part of the boat's stern is now above sea level. In a race against time the crew starts cutting a hole out of the highest point in the sub: the telephone-booth-size tiller room. With no acetylene torch, no power tools -- nothing but ratchet drills and hacksaws -- the crew must cut through nearly an inch of strengthened steel or die in the attempt.

An incredible drama, a story of heroism and of heroes, Under Pressure is that most remarkable of books, a true story far more dramatic than any fiction.