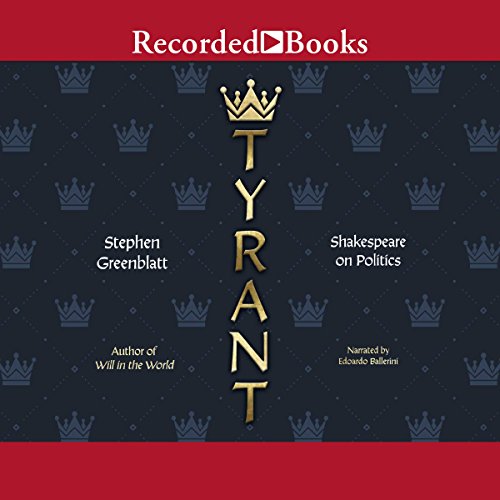 As an aging, tenacious Elizabeth I clung to power, a talented playwright probed the social causes, the psychological roots, and the twisted consequences of tyranny. In exploring the psyche (and psychoses) of the likes of Richard III, Macbeth, Lear, Coriolanus, and the societies they rule over, Stephen Greenblatt illuminates the ways in which William Shakespeare delved into the lust for absolute power and the catastrophic consequences of its execution.

Cherished institutions seem fragile, political classes are in disarray, economic misery fuels populist anger, people knowingly accept being lied to, partisan rancor dominates, spectacular indecency rules - these aspects of a society in crisis fascinated Shakespeare and shaped some of his most memorable plays. With uncanny insight, he shone a spotlight on the infantile psychology and unquenchable narcissistic appetites of demagogues - and the cynicism and opportunism of the various enablers and hangers-on who surround them - and imagined how they might be stopped. As Greenblatt shows, Shakespeare's work, in this as in so many other ways, remains vitally relevant today.

Every day modern psychology and biochemistry pour out new theories about correlations and causation in human behaviour. But as corollary of Nasim Taleb's example that 'a dove could fly before the theories of flight were invented', Stephen Greenblatt shows that William Shakespeare already thoroughly felt the intricacies of the nature of tyrants. In this book, Stephen Greenblatt proofs the case and takes Shakespeares plays as the corpus of knowledge and guides us with the utmost skill from citation to citation in this brilliant deconstruction of personalities like D.Trump and his likewises.