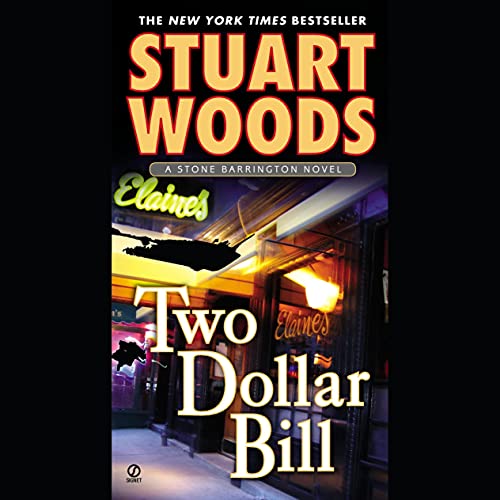 Two-Dollar Bill delivers all the storytelling twists and whip-smart banter readers have come to love in Stuart Woods's thrillers. In this latest, Stone Barrington, the suave Manhattan cop-turned-lawyer, is back on his home turf facing down a brilliant Southern flimflam man.

The fun, and action, begins with what Stone believes will be a quiet dinner with his ex-partner, Dino, but they are interrupted by Billy Bob, a filthy rich, smooth-talkin' Texan, who strolls in and parks himself at their table. He's in town "to make money", he says, unwrapping his wad of rare two-dollar bills, and in need of an attorney, namely, Stone, though he won't say why or when such representation will be necessary. As they leave the restaurant, however, an unknown assailant shoots at Stone and his cohorts, and the wily Southerner has spread his two-dollar bills around to everyone like confetti.

Against his better judgment, Stone offers Billy Bob a safe haven for the night but almost immediately begins to suspect that he's made several precipitous misjudgments, for the slippery out-of-towner has gone missing and someone has been found dead, in Stone's townhouse no less. Stone is now caught between a beautiful federal prosecutor and a love from his past, a con man with more aliases than hairs on his head, and a murder investigation that could ruin them all.