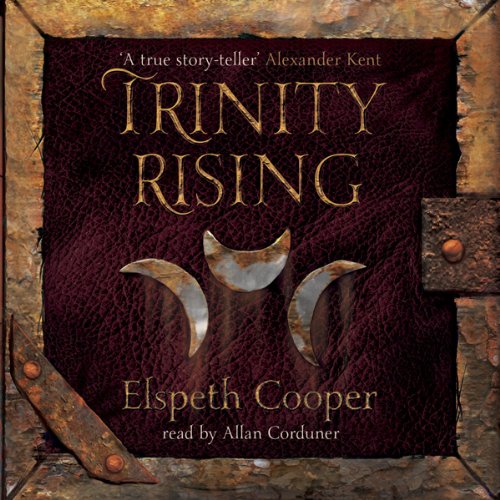 The future holds nothing but blood and death… and Teia fears there is nothing she can do about it. Her clan is riding to war, but her secret, untrained gift of foretelling has shown her they are riding to their doom. If she cannot turn them from their course, her only hope of saving them will be to betray them to their sworn enemies. Gair is mourning his past… but there is no time to dwell on his grief or hunger for revenge. Pursuing an artefact from the Founding Wars, he travels deep into the hostile southern deserts. As religious tensions erupt into bloody violence around him, he must make an impossible choice: save innocent lives or sacrifice them in the hope that thousands more can be saved later. And all the while, his grip on his powers is failing.

Read by Allan Corduner, who trained at the Bristol Old Vic Theatre School and has appeared on stage in Passion at the Donmar Warehouse, Serious Money in the West End and Titanic on Broadway, and on screen in Yentl and Topsy-Turvy, amongst many other roles. He is a highly experienced voice actor and memorably narrated the voice of Death when reading The Book Thief. He has read Elspeth Coopers' Wild Hunt novels for Orion.

While I really enjoyed the first book, this unfortunately suffers from the curse of being a middle book (or now a 2 out of 4 books). New characters are introduced and fleshed out, which is nice and they are interesting characters, but the ones established in the first book, including Gair, appear more as foot notes. Gair plays a part in this book but he really only has scenes towards the very end and even then it's not really satisfying. You learn but little about his character and while he does start a new journey (both figuratively and physically) and there are dramatic events, the story falls a little flat. He feels flat in this book.

Teia is a great addition to the story and (or but, depending on how you see it) she is, to me, the focus of this book. While Teia's journey is dramatic and enjoyable, it also is essentially the whole book. Almost everything is connected to her, her clan and the speaker of the clan, who is in her own right a brilliant character. For readers wanting more of Gair, more of his story, there's little pay off. Many of the characters from book 1 appear just as small side stories towards the very end of the book. While their stories seem important, it feels a little forced.

The new characters (mainly Teia and to a certain extent Cecil) are good, solid characters. They are likeable and you root for them. Their stories matter.

Overall, its a book worth listening to, but it is a book that pushes a lot of new content at the cost of the original characters. If you are aware of that, you will enjoy it. This is not a book about Gair and his story. He just happens to be in it as well. This book is about Teia. And that's ok because her story deserves just as much telling as Gairs.