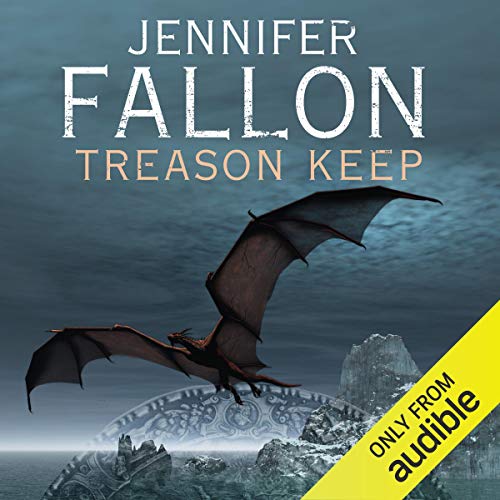 In Medalon, Book One of the Hythrun Chronicles, Tarja Tenragen and his half-sister R'shiel were forced to lead a rebellion against their power hungry mother, who ruled Medalon as the First Sister of the Blade. But their mother's defeat came at great cost: not only does it leave Medalon vulnerable to invasion, R'shiel is mortally wounded.

As Treason Keep begins, R'shiel is on the brink of death. Her only hope is the healing powers of the Harshini - magical beings long thought extinct. Even they will be hard-pressed to save the Demon Child of prophecy...

On Medalon's northern border, Tarja and the Defenders are far too few to stand against the invaders from Karien, even with the new fortifications built onto Treason Keep. The only thing that can save them is an alliance with Hythria, with whom the Medalon have been skirmishing for generations. But can Tarja trust Damin Wolflblade, warlord and heir to the throne of Hytrhia, with whom Tarja has personally crossed blades upon the field of battle?

Meanwhile, King Hablet of Fardohnya weds his eldest daughter, the stunningly beautiful but shrewish Princess Adrina, to the Karien Heir. Hablet hopes to place his grandchild on the Karien throne. But the wayward and rebellious Adrina has her own plans, and the fate of three nations dangle upon her insolent whim.

Featuring a heady blend of political intrigue, war, and one of the great love-hate relationships in fantasy fiction, Treason Keep is sure to please the many fans of epic fantasy.

"‘Fantasy readers in the U.S. will welcome Jennifer Fallon, Australia's latest export." (Jacqueline Carey)
"Jennifer Fallon structures her novels to capture the reader from the opening paragraph and you can only break from her grasp when you reach the final page. I recommend Treason Keep." (Altair)
"Following up on the success of her debut novel Medalon, Australian author Jennifer Fallon is back with the second installment of her rousing Demon Child Trilogy. There's more action and a rash of political shenanigans in Treason Keep, but it's the warmth and humanity of her characters that will keep you reading." (TV Week (Australia))
"Fallon orchestrates [the complex plot] this with a smooth sense of dialogue and a sure feeling for pace—and she has the ability to juxtapose the comic and the dramatic without undercutting either. A well-executed “popcorn” fantasy, with complex characters and entertaining style." (Kirkus)