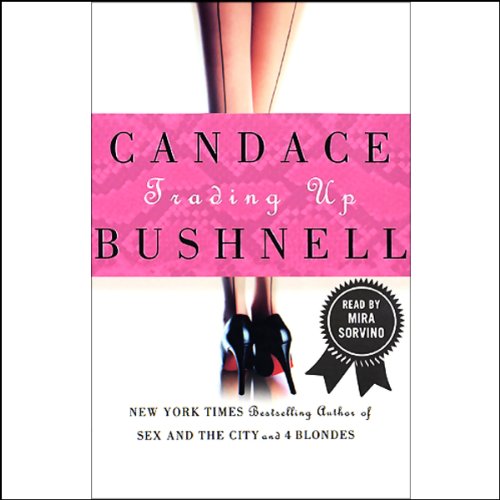 Janey Wilcox wants to be on top. Not since author Candace Bushnell created Carrie Bradshaw and Sex and the City has there been a heroine like Janey Wilcox, the protagonist of Bushnell's extraordinary new drama. Janey is a beautiful yet struggling social climber determined to survive in New York City society. Listeners first met Janey in Bushnell's international best seller 4 Blondes. Now, everyone's favorite character is back, with a major modeling contract, a Porsche Boxster, and big plans.

As Janey attends the hottest party in the Hamptons, the listener is drawn into a seemingly glamorous world of $100,000 cars, hunky polo players, media moguls and relationships whose hidden agendas are detectable only by the socially astute. But look out! As Janey is pulled into this world of too much money and too few morals, unseen forces are conspiring to bring down. Janey Wilcox is too young and too beautiful to fail, however.

Trading Up is a hilarious tour de force by the writer who made Manolo Blahniks a household name. As entertaining as it is searingly observant and bitingly witty, the novel takes aim at a world in which one can never be rich enough, well dressed enough or high enough in the social pecking order. Like Jane Austen or Edith Wharton, Bushnell lovingly skewers a society she knows well, and brings listeners inside the heads and conversations of characters who could have come right from the pages of Vanity Fair. Listeners will love following Janey as she rises, falls and picks herself up again and again.