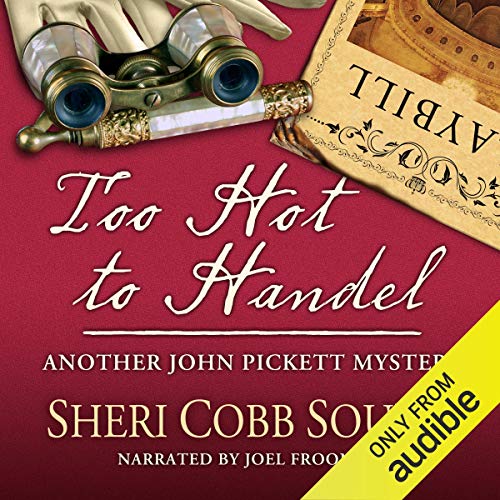 Too Hot to Handel

When a rash of jewel thefts strikes London, magistrate Patrick Colquhoun deploys his Bow Street Runners to put a stop to the crimes. The Russian Princess Olga Fyodorovna is to attend a production of Handel’s Esther at Drury Lane Theatre, where she will wear a magnificent diamond necklace. The entire Bow Street force will be stationed at various locations around the theatre - including John Pickett, who will occupy a box directly across from the princess.

In order to preserve his incognito, Pickett must appear to be a private gentleman attending the theatre. Mr. Colquhoun recommends that he have a female companion - a lady, in fact, who might prevent him from making any glaring faux pas. But the only lady of Pickett’s acquaintance is Julia, Lady Fieldhurst, to whom he accidentally contracted a Scottish irregular marriage several months earlier, and with whom he is seeking an annulment against his own inclinations - and for whom he recklessly declared his love, secure in the belief he would never see her again.

The inevitable awkwardness of their reunion is forgotten when the theatre catches fire. In the confusion, the Russian diamonds are stolen, and Pickett is struck in the head and rendered unconscious. Suddenly it is up to Julia not only to nurse him back to health, but to discover his attacker and bring the culprit - and the jewel thief - to justice.