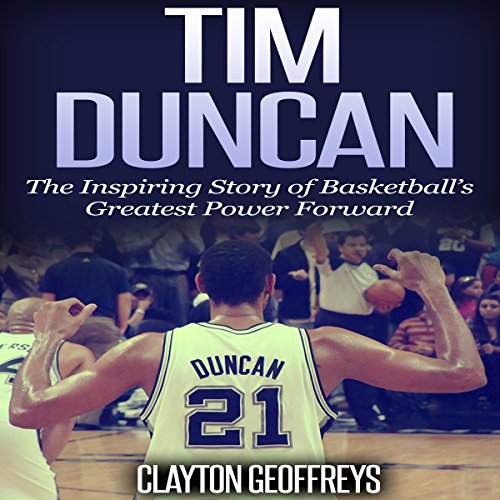 Learn the incredible story of basketball superstar Tim Duncan! In Tim Duncan: The Inspiring Story of Basketball's Greatest Power Forward, you'll listen to the inspirational story of basketball's greatest power forward Tim Duncan. Tim Duncan has kept the San Antonio Spurs relevant in the NBA for every year of his long NBA career. In this short book, we will learn about how Duncan became the incredible power forward that he is today. Starting first with a look into his childhood and early life, we'll learn about Tim Duncan prior to entering the NBA, along with his time in the NBA playing alongside David Robinson to his time playing with Tony Parker and Manu Ginobili leading the San Antonio Spurs. Tim Duncan is easily one of the greatest, if not the greatest power forward to play the game of basketball. For a man who once was just a kid fulfilling a promise to his parents to earn a college degree at Wake Forest, Tim Duncan has come a long way over the course of his basketball career. It will be exciting to see how Duncan and the Spurs do in this year's 2013-2014 NBA playoffs. Here is a preview of what is inside this book: