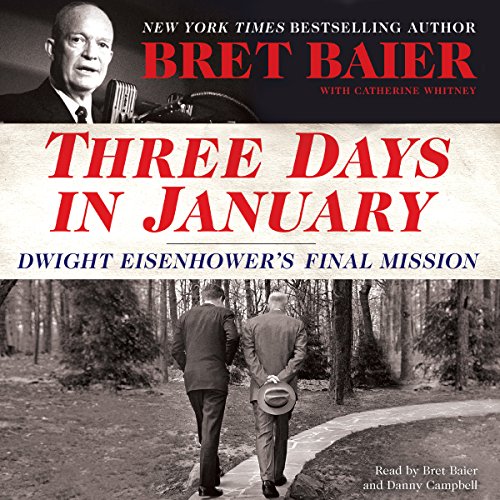 In this debut history from one of America's most influential political journalists, Bret Baier casts the three days between Dwight Eisenhower's prophetic "farewell address" on the evening of January 17, 1961, and his successor John F. Kennedy's inauguration on the afternoon of January 20 as the final mission of one of modern America's greatest leaders.

As president, the former supreme commander of Allied forces during World War II successfully guided the country out of war in Korea, through the apocalyptic threat of nuclear war with Russia, and into one of the greatest economic booms in world history. In this last address to the nation, Eisenhower looked to the future, warning Americans against the dangers of elevating partisanship above national interest, excessive government budgets (particularly deficit spending), the expansion of the military-industrial complex, and the creeping political power of special interests. Baier explores the many ways these visionary words continue to resonate today; he also explains how Ike embodied the qualities of political leadership that the country is urgently hungering for at the present.

Seeking to prepare a new generation for power, Eisenhower intensely advised the 43-year-old Kennedy in the intervening time between the speech and the inauguration. Dwight Eisenhower left the public stage at the end of these three days in January 1961 having done more than perhaps any other modern American to set the nation "on our charted course toward permanent peace and human betterment". Despite their differences in party affiliation, President Kennedy would continue to seek his predecessor's advice and counsel during his time in office. Five decades later Baier's Three Days in January illuminates how Eisenhower, an underappreciated giant of US history, still offers vital lessons for our own time.