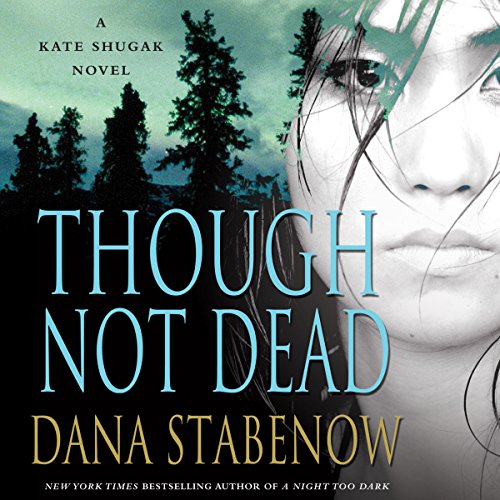 This 18th novel in the Kate Shugak series features dozens of characters, ranging from a two-bit thug and a former “good-time girl” to a Chanel-suit wearing librarian and a soft-spoken aunty. Two or three of the characters appear both as wizened senior citizens, and - in flashbacks from a half-century before - as teenagers. In light of the intricate web of characters, narrator Marguerite Gavin’s ability to differentiate each voice is utterly impressive.

Gavin reprises here a role she’s performed in several other Stabenow novels: Kate Shugak, a no-nonsense, Aleutian private investigator. In the tradition of the best gritty procedurals, Kate doesn’t go looking for trouble - trouble finds her. Gavin voices our hero with the perfect mix of brittle toughness, latent vulnerability, and the dogged fierceness peculiar to an ass-kicker who is also less than 5-foot-3 and 110 pounds. Kate has the quintessential tough broad attitude and analytical mind that make a great P.I., but Gavin also understands how to portray the uniqueness of Kate’s character within the detective novel genre: not only is Kate a female private investigator; she’s also a Native American.

Stabenow, who grew up in southern Alaska near the Chugach National Forest, deeply understands the values of the Aleutian community she's portraying, as well as the motivations of the "park rats" who live in the Chugach. Asking a park rat what brought him to Alaska is considered the height of rudeness in this culture. Knowing this, Gavin conveys reticence in her voice - the reticence to speak up, to say more than one should, to trust someone - extremely effectively. As the mystery unfolds, Gavin’s voice never betrays the next plot twist that is just around the corner. Even when Stabenow’s description veers toward hackneyed, Gavin finds a way to make the salient details stand out and keeps the listener engaged, providing a satisfying listen for crime novel fans. -Maggie Frank

The residents of Alaska’s largest national park are stunned by the death of one of their oldest members, 87-year-old Old Sam Dementieff...even private investigator Kate Shugak. Sam, a lifelong resident, dubbed the “father” of all of the Park rats - even though he had no children of his own - was especially close to Kate, his niece, but even she is surprised to discover that in his will he’s left her everything, including a letter instructing her simply to, “find my father”.

Easier said than done, since Sam’s father is something of a mystery. An outsider, he disappeared shortly after learning about Sam’s existence, taking with him a priceless tribal artifact, a Russian icon. And in the three days after Kate begins her search through Sam’s background, she gets threatened - and worse.

The flashbacks from Sam’s fascinating life, including scenes from major events in Alaska’s colorful history, punctuate a gripping story in which Kate does her best to fulfill Sam’s last wish without losing her own life to the people who are following her every move, though what they are searching for Kate doesn’t even know.

In Dana Stabenow’s breathtaking new novel, Though Not Dead, the 18th to feature Kate Shugak, Kate’s search for the long-lost family secrets that have been interwoven with the epic history of an unforgiving land leads to an extraordinary treasure hunt with fatal consequences.