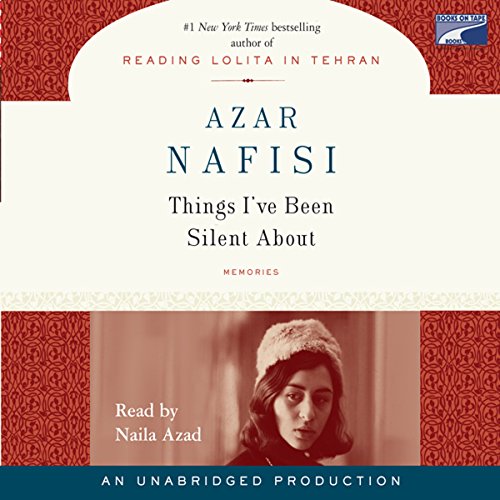 Things I've Been Silent About

In her smash literary debut, 2003's Reading Lolita in Tehran, Azar Nafisi established herself as the premier Persian memoirist. But whereas she was political before, in Things i've Been Silent About now she gets personal. An iranian-born, British- and American-educated professor, Nafisi turns her analytical eye inward and her voice outward. "i no longer believe that we can keep silent. We never really do, mind you. in one way or another we articulate what has happened to us through the kind of people we become," she writes. She helps this process along by digging through artifacts: her father's diaries, photographs, memories of her mercurial mother's "fictions", and holds nothing back, not childhood assault, a disastrous first marriage, or even her father's romantic affairs, which, in some ways, she helped him conduct.

The memoir becomes even more intimate, thanks to the narration of Naila Azad. With her strong iranian accent and gentle delivery, Azad makes you feel as if it could be Nafisi herself reading her tale. Speaking in a natural voice, she makes the book seem not a book at all, but a story shared between friends. in moments of reflection, Azad slows her cadence, drawing out words, making them more poignant, sometimes dropping to a near whisper. To relate flashbacks of the author speaking as a young child, she makes her voice softer, more naïve. And yet, because the voice still comes from an adult, it's a compelling technique  especially in Chapter 3, entitled "Learning to Lie". You get the sense the author doesn't know what she is doing just now, but that she knew all along. And though the political details  the events leading up to the islamic Revolution of 1978-79, her father's imprisonment without trial, a frightening confrontation with fundamentalists who took issue with the author not covering her hair-are endlessly compelling and masterfully related, it is the details of Nafisi's family life, at once unique and universal, that make this a must-listen. Kelly Marages

"I started making a list in my diary titled “Things I Have Been Silent About.” Under it I wrote: 'Falling in Love in Tehran. Going to Parties in Tehran. Watching the Marx Brothers in Tehran. Reading Lolita in Tehran.' I wrote about repressive laws and executions, about public and political abominations. Eventually I drifted into writing about private betrayals, implicating myself and those close to me in ways I had never imagined." (from Things I Have Been Silent About)

Azar Nafisi, author of the beloved international best seller Reading Lolita in Tehran, now gives us a stunning personal story of growing up in Iran, memories of her life lived in thrall to a powerful and complex mother, against the background of a country’s political revolution. A girl’s pain over family secrets; a young woman’s discovery of the power of sensuality in literature; the price a family pays for freedom in a country beset by political upheaval - these and other threads are woven together in this beautiful memoir, as a gifted storyteller once again transforms the way we see the world and “reminds us of why we read in the first place” (Newsday).

Nafisi’s intelligent and complicated mother, disappointed in her dreams of leading an important and romantic life, created mesmerizing fictions about herself, her family, and her past. But her daughter soon learned that these narratives of triumph hid as much as they revealed. Nafisi’s father escaped into narratives of another kind, enchanting his children with the classic tales like the Shahnamah, the Persian Book of Kings. When her father started seeing other women, young Azar began to keep his secrets from her mother. Nafisi’s complicity in these childhood dramas ultimately led her to resist remaining silent about other personal, as well as political, cultural, and social, injustices.

Reaching back in time to reflect on other generations in the Nafisi family, Things I’ve Been Silent About is also a powerful historical portrait of a family that spans many periods of change leading up to the Islamic Revolution of 1978-79, which turned Azar Nafisi’s beloved Iran into a religious dictatorship. Writing of her mother’s historic term in Parliament, even while her father, once mayor of Tehran, was in jail, Nafisi explores the remarkable “coffee hours” her mother presided over, where at first women came together to gossip, to tell fortunes, and to give silent acknowledgment of things never spoken about, and which then evolved into gatherings where men and women would meet to openly discuss the unfolding revolution.

Things I’ve Been Silent About is, finally, a deeply personal reflection on women’s choices, and on how Azar Nafisi found the inspiration for a different kind of life. This unforgettable portrait of a woman, a family, and a troubled homeland is a stunning book that readers will embrace, a new triumph from an author who is a modern master of the memoir.

"Absorbing...a testament to the ways in which narrative truth-telling - from the greatest works of literature to the most intimate family stories - sustains and strengthens us.” (O: The Oprah Magazine)

“A gifted storyteller with a mastery of Western literature, Nafisi knows how to use language both to settle scores and to seduce.” (New York Times Book Review)