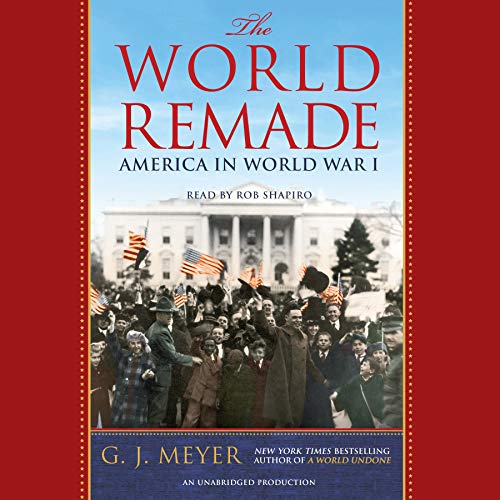 A bracing, indispensable account of America's epoch-defining involvement in the Great War, rich with fresh insights into the key issues, events, and personalities of the period

After years of bitter debate, the United States declared war on Imperial Germany on April 6, 1917, plunging the country into the savage European conflict that would redraw the map of the continent - and the globe. The World Remade is an engrossing chronicle of America's pivotal, still controversial intervention into World War I, encompassing the tumultuous politics and towering historical figures that defined the era and forged the future.

When it declared war, the United States was the youngest of the major powers and militarily the weakest by far. On November 11, 1918, when the fighting stopped, it was not only the richest country on earth but the mightiest. With the mercurial, autocratic President Woodrow Wilson as a primary focus, G. J. Meyer takes listeners from the heated deliberations over US involvement, through the provocations and manipulations that drew us into the fight, to the battlefield itself and the shattering aftermath of the struggle. America's entry into the Great War helped make possible the defeat of Germany that had eluded Britain, France, Russia, and Italy in three and a half years of horrendous carnage. Victory, in turn, led to a peace treaty so ill conceived, so vindictive, that the world was put on the road to an even bloodier confrontation a mere 20 years later.

On the home front, Meyer recounts the breakup of traditional class structures, the rise of the progressive and labor movements, the wave of anti-German hysteria, and the explosive expansion of both the economy and federal power, including shocking suspensions of constitutional protections that planted the seeds of today's national security state. Here also are revealing portraits of Theodore Roosevelt, Henry Cabot Lodge, Robert La Follette, Eugene Debs, and John J. "Black Jack" Pershing, among others, as well as European leaders such as "Welsh Wizard" David Lloyd George of Britain, "Tiger" Georges Clemenceau of France, and Kaiser Wilhelm II of Germany.

Meyer interweaves the many strands of his story into a gripping narrative that casts new light on one of the darkest, most forgotten corners of US history. In the grand tradition of his earlier work A World Undone - which centered on the European perspective - The World Remade adds a new, uniquely American dimension to our understanding of the seminal conflict of the 20th century.

"Accomplished with brio...[Meyer] blends 'foreground, background, and sidelights' to highlight the complex interactions of apparently unconnected events behind the four-year catastrophic war that destroyed a world and defined a century." ( Publishers Weekly)
"With a historian's eye for clearheaded analysis and a storyteller's talent for detail and narrative, G. J. Meyer presents a compelling account of the blunders that produced the world's first 'great war' and set the stage for many of the tragic events that followed." (Steve Gillon, resident historian, The History Channel)
"Especially suited for the interested American reader.... Meyer's sketches of the British Cabinet, the Russian Empire, the aging Austro-Hungarian Empire, the leaders of Prussia with their newly minted swagger, are lifelike and plausible. His account of the tragic folly of Gallipoli is masterful.... [ A World Undone] has an instructive value that can scarcely be measured." ( Los Angeles Times)