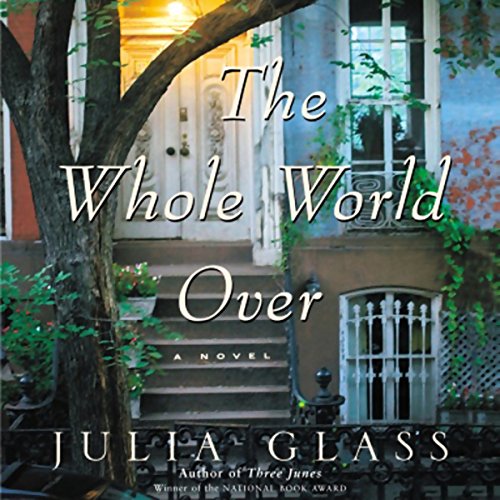 The Whole World Over

From the author of the beloved novel Three Junes comes a rich and commanding story about the accidents, both grand and small, that determine our choices in love and marriage. Greenie Duquette, openhearted yet stubborn, devotes most of her passionate attention to her Greenwich Village bakery and her four-year-old son, George. Her husband, Alan, seems to have fallen into a midlife depression, while Walter, a traditional gay man who has become her closest professional ally, is nursing a broken heart.

It is at Walter's restaurant that the visiting governor of New Mexico tastes Greenie's coconut cake and decides to woo her away from the city to be his chef. For reasons both ambitious and desperate, she accepts, and finds herself heading west without her husband. This impulsive decision will change the course of several lives within and beyond Greenie's orbit. Alan, alone in New York, must face down his demons; Walter, eager for platonic distraction, takes in his teenage nephew. Yet Walter cannot steer clear of love trouble, and despite his enforced solitude, Alan is still surrounded by women: his powerful sister; an old flame; and an animal lover named Saga, who grapples with demons all her own. As for Greenie, living in the shadow of a charismatic politician leads to a series of unforeseen consequences that separate her from her only child. We watch as folly, chance, and determination pull all these lives together and apart over a year that culminates in the fall of the twin towers at the World Trade Center, an event that will affirm or confound the choices each character has made, or has refused to face.

Julia Glass is at her best here, weaving a glorious tapestry of lives and lifetimes, of places and people, revealing the subtle mechanisms behind our most important, and often most fragile, connections to others. In The Whole World Over she has given us another tale that pays tribute to the extraordinary complexities of love.

"Glass brings the same assured narrative drive and engaging prose to this exploration of the quest for love and its tests: absence, doubt, infidelity, guilt, and loss." ( Publishers Weekly)
"Glass deftly explor[es] the sacrifices, compromises, and leaps of faith that accompany love." ( Booklist)