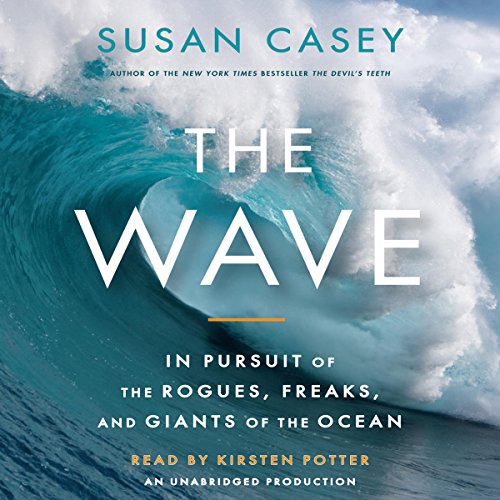 The Wave, Susan Casey’s fascinating account of rogue waves, the scientists who study them, and the fearless surfers who travel the world to ride these elusive, powerful freaks of nature, will forever change how you look at the ocean. It’s also one of the best books I’ve ever heard.

Kirsten Potter narrates The Wave with a no-nonsense, matter-of-fact tone that perfectly suits Casey’s carefully researched book. Then, at just the right moments, she delivers descriptions of these colossal walls of water with the same amount of awe and wonder that Casey clearly feels for these almost mythical creatures. Potter’s comfort with the text makes you feel like you’re right there with Casey, hanging out in Oahu with the world’s greatest surfers or discussing complex scientific theories with the world’s foremost wave scientists.

But make no mistake  The Wave is not a dry, scientific tome geared for climatologists and oceanographers. While Casey does a fantastic job of translating scientific theories into easy-to-understand language about why such massive waves have become m ore common, The Wave really soars when Casey tags along with big wave riders like Laird Hamilton and their quest to ride the largest waves on earth, waves approaching heights of 80 to 100 feet  or even higher.

Casey doesn’t just sit on the sidelines though. She thrusts herself onto boats and jet skis into some of the most fearsome waves in Hawaii, California, Mexico, and Bali. She earns the right to call these waves by their first names: Jaws, Mavericks, Killers, Ghost Tree, and Egypt. Her keen eye for detail also enables her to describe in vivid language why each of these waves deserves a place in “the all-star cast in nature’s great drama”.

The Wave is a gripping sea adventure that can hold its own against other nautical nonfiction masterpieces like Sebastian Junger’s A Perfect Storm, Thor Heyerdahl’s Kon Tiki, and Ernest Shackleton’s South. The Wave will change your perspective on our oceans. They’re not static bodies of water that systematically rise and fall according to precise tidal schedules. They are unpredictable, powerful pools of energy that can be unleashed when we least expect them. It’s what makes these waves so terrifying  and so magically mesmerizing. Ken Ross

From Susan Casey, bestselling author of The Devil’s Teeth, an astonishing book about colossal, ship-swallowing rogue waves and the surfers who seek them out.

For centuries, mariners have spun tales of gargantuan waves, 100-feet high or taller. Until recently scientists dis​missed these stories - waves that high would seem to violate the laws of physics. But in the past few decades, as a startling number of ships vanished and new evidence has emerged, oceanographers realized something scary was brewing in the planet’s waters. They found their proof in February 2000, when a British research vessel was trapped in a vortex of impossibly mammoth waves in the North Sea - including several that approached 100 feet.

As scientists scramble to understand this phenomenon, others view the giant waves as the ultimate challenge. These are extreme surfers who fly around the world trying to ride the ocean’s most destructive monsters. The pioneer of extreme surfing is the legendary Laird Hamilton, who, with a group of friends in Hawaii, figured out how to board suicidally large waves of 70 and 80 feet. Casey follows this unique tribe of peo​ple as they seek to conquer the holy grail of their sport, a 100-​foot wave.

In this mesmerizing account, the exploits of Hamilton and his fellow surfers are juxtaposed against scientists’ urgent efforts to understand the destructive powers of waves - from the tsunami that wiped out 250,000 people in the Pacific in 2004 to the 1,740-foot-wave that recently leveled part of the Alaskan coast.

Like Jon Krakauer’s Into Thin Air, The Wave brilliantly portrays human beings confronting nature at its most ferocious.

“Something is stewing in our seas, and Susan Casey - traveling, and in some cases swimming, all around the world - is eager to find out what it is. Both a rollicking look at the ocean’s growing freakishness and a troubling examination of our ailing planet, The Wave gives new meaning to the term ‘immersion reporting.’” (Hampton Sides, author of Hellhound on His Trail, Blood and Thunder, and Ghost Soldiers)
“At once scary and fun, The Wave surprises at every turn.” (Elizabeth Kolbert, author of Field Notes from a Catastrophe)
“Like the surfers and scientists she profiles, Casey lived and breathed giant waves for years. Casey combines an insane passion for craft with an uncanny ability to describe the indescribable. In The Wave she whisks the reader off to unimaginably surreal settings and puts them in the middle of mind-blowing scenarios. This book sucked me in like the undertow at Pipeline.” (Mary Roach, author of Stiff and Packing for Mars)