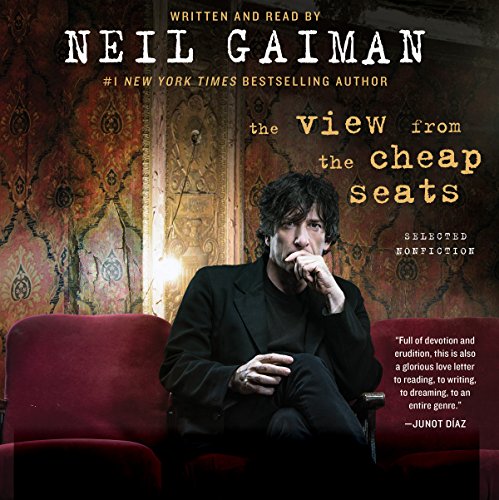 The View from the Cheap Seats

An inquisitive observer, thoughtful commentator, and assiduous craftsman, Neil Gaiman has long been celebrated for the sharp intellect and startling imagination that informs his fiction. Now The View from the Cheap Seats brings together, for the first time ever, more than 60 works of his outstanding nonfiction on topics and people close to his heart.

In prose that's analytical yet playful, erudite yet accessible, Neil explores a broad range of interests and topics, including (but not limited to) authors past and present; music; storytelling; comics; bookshops; travel; fairy tales; America; inspiration; libraries; ghosts; and the title piece, at turns touching and self-deprecating, which recounts his experiences at the 2010 Academy Awards in Hollywood.

Neil ponders the truth of fiction and the power of stories (and why we tell them) and offers his own profiles of and insights into writers who have influenced him, including C. S. Lewis, J. R. R. Tolkien, Ray Bradbury, Diana Wynne Jones, Stephen King, Rudyard Kipling, James Thurber, and his dear friend, Terry Pratchett. He offers unlikely perspectives on subjects as diverse as The Bride of Frankenstein, Doctor Who, Batman, Tori Amos, Lou Reed, They Might Be Giants, and Amanda Palmer. And he includes a moving essay on the plight of Syrian refugees in a United Nations camp in Jordan.

Illuminating and incisive, witty and wise, The View from the Cheap Seats explores some of the issues, subjects, and people that matter most to Neil Gaiman - and offers a unique glimpse into the mind of one of the most beloved and influential writers of our time.

This will be one of my favourite Audibles! What a rich mind. The passion with which Neil Gaiman talks about the importance of books, building ideas, daydreaming and completely random thoughts that can change the world are so alluring, wise, funny! Need to keep myself from nodding in agreement in order to avoid whiplash. Yes, I do not agree with every single statement, but this collection of essays, speeches etc. has made me think in a different more open way than any other work in a very long time. Bravo!

Great delivery, lots of substance, almost each of them a jewel. I'd give Gaiman, as usual, not five but eighty stars. Or eight hundred. Or eight million.
However, I reserve the last of the 5 symbolic stars because a few of the writings are too personal or simply do not have the same level of excellence, and they seem to be part of the collection just because they exist. Which they do. But just not at the same (estelar) level of excellence
It made me dream and wander off. And for that I am grateful.