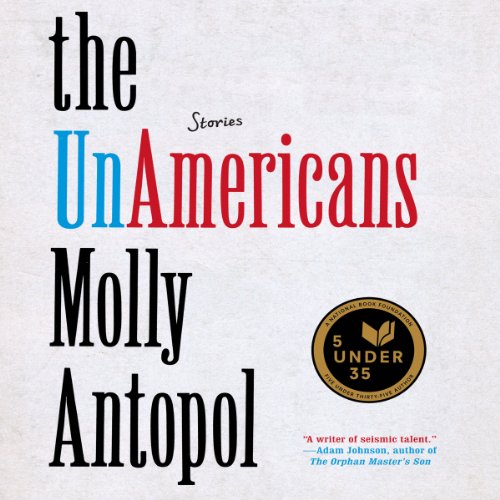 Editors Select, February 2014 - I was initially attracted to Molly Antopol’s The UnAmericans because her style and subject matter seemed to resemble Jhumpa Lahiri, who is one of my favorite writers. Antopol lives up to this grand comparison: like Lahiri, her stories overflow with the universality of the human experience, puncturing tragey with unexpected humor. I found myself continuously thinking about the characters long after their chapters ended, especially thanks to seasoned narrator Jennifer van Dyck, who helps brings the voices of these people to life. —Sarah, Audible Editor

The UnAmericans, a stunning exploration of characters shaped by the forces of history, is the debut work of fiction by Molly Antopol, a 2013 National Book Foundation "5 Under 35" Honoree.

An absentee father, a former dissident from communist-era Prague, needles his adult daughter for details about her newly commissioned play when he fears it will cast him in an unflattering light. An actor, imprisoned during the Red Scare for playing up his communist leanings to get a part with a leftist film director, is shamed by his act when he reunites with his precocious young son. An Israeli soldier, forced to defend a settlement filled with American religious families, still pines for a chance to discover the United States for himself. A young Israeli journalist, left unemployed after America’s most recent economic crash, questions her life path when she begins dating a middle-aged widower still in mourning for his wife. And in the book’s final story, a tour de force spanning three continents and three generations of women, a young American and her Israeli husband are forced to reconsider their marriage after the death of her dissident art-collecting grandmother.

Again and again, Molly Antopol’s deeply sympathetic characters struggle for footing in an uncertain world, hounded by forces beyond their control. Their voices are intimate and powerful and they resonate with searing beauty. Antopol is a superb young talent, and The UnAmericans will long be remembered for its wit, humanity, and heart.