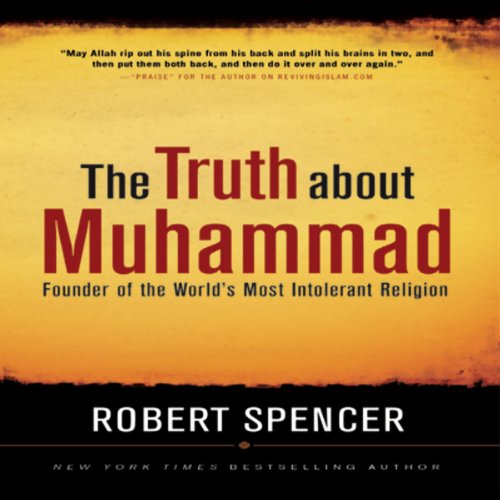 The Truth About Muhammad

The Truth About Muhammad

There have been other biographies of the Prophet of Islam, a few written by authors living in non-Muslim countries (Yusuf Islam's splendid audio work The Life Of The Prophet springs instantly to mind here), but not that many by non-Muslims. And it is purely because Robert Spencer is not a Muslim that he is able to discuss, without fear and without any degree of 'political correctness', aspects of the holy man's life that many, both believers and unbelievers, hitherto did not know.

Mr. Spencer is no stranger to controversy, as his books and his 'Jihadwatch' Web site speak for themselves, yet he manages never to pull his punches. He takes quotations from the Qur'an, and other works held in high regard, and uses them to present different sides of the Prophet's character: his skill as a military leader, his views on other religions, his pressure and agitation for constant war against unbelievers. It's a challenging work, and will probably win him fans and sworn enemies in equal measure.

James Adams reads the audiobook, endowed with a mellow English accent, yet tackling the Arabian pronunciation with skill and aplomb. The English accent surprised me, since Robert Spencer is American, but being a straight factual work I believe a good voice from either side of the Atlantic would suffice. I listened in one sitting; the near seven hours passing remarkably swiftly (always a good sign) and the narration and audio quality were of consistently high quality. Simply an all-round excellent book.

In The Truth about Muhammad, New York Times best-selling author and Islam expert Robert Spencer offers an honest and telling portrait of the founder of Islam � perhaps the first such portrait in half a century � unbounded by fear and political correctness, unflinching, and willing to face the hard facts about Muhammad's life that continue to affect our world today.

Spencer details Muhammad's development from a preacher of hellfire and damnation into a political and military leader who expanded his rule by force of arms, promising his warriors luridly physical delights in Paradise if they were killed in his cause. He explains how the Qur'an's teaching on warfare against unbelievers developed, with constant war to establish the hegemony of Islamic law as the last stage.