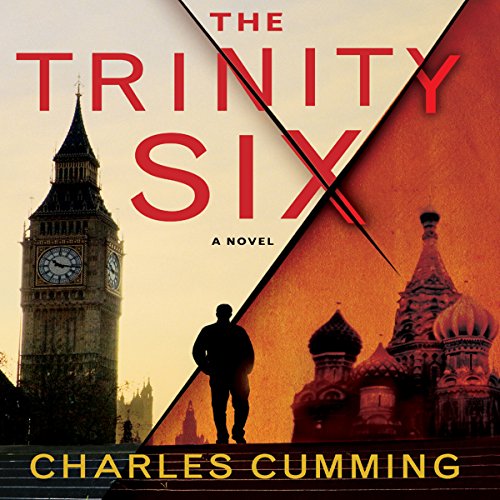 British writer Charles Cumming’s latest thriller, The Trinity Six, postulates that there was a sixth man involved in the sensational Cambridge Five spy ring. The real Cambridge Five were recruited by Russia in the 1930s and continued to pass on information into the ‘50s. In modern day London, professor Sam Gaddis is tipped off by a journalist friend that a sixth spy is alive and well and being protected by the Russian government and the UK’s intelligence office, MI6. Gaddis, a noted Russian history scholar, decides to write a book about the case to make a quick buck to pay alimony and child support, but when the journalist and her sources turn up dead, Gaddis is pulled into the international intrigue that hops the globe from London and Moscow to Austria and New Zealand.

While The Trinity Six is set in the 21st century, John Lee’s narration recalls those old BBC radio plays from another era. Lee’s clipped English accent is muscular, maybe a little too rushed at times, but it fits the breakneck speed at which Gaddis is subsumed by the action unfolding around him. There’s often a note of incredulity in Lee’s voicing of Gaddis, which fits perfectly with an ordinary professor forced into becoming an often-reckless detective. Gaddis is in way over his head, but he’s also smart and can charm his way out situations that might otherwise get him killed. Lee hits the right notes of curiosity, anger, and fear as the thriller hurdles toward its twist conclusion.

When Gaddis goes to Russia, Hungary, and Vienna to continue his investigation, Lee gets to trot out an impressive series of accents. Since Gaddis is fluent in Russian and deals with a number of Soviet agents, Lee’s accent is realistically heavy on the consonants. The same goes for the Austrian characters, who help Gaddis escape pursuing Russian agents in an elaborate Hitchcockian thrill ride through Vienna. The female characters, including MI6 deep cover agent Tanya Acocella, come off as either too breathy or masculine, but Lee manages to give each one a distinct personality. That’s a bonus to the listener, since one of the shortcomings of Cumming’s book is that, while integral to the plot, the female characters are thinly written. But that’s a minor quibble. Sit back, have a cup of tea, and get lost in this adventure. Collin Kelley

The most closely guarded secret of the Cold War is about to be exposed – the identity of a SIXTH member of the infamous Cambridge spy ring. And people are killing for it....

London, 1992. Late one night, Edward Crane, 76, is declared dead at a London hospital. An obituary describes him only as a 'resourceful career diplomat'. But Crane was much more than that – and the circumstances surrounding his death are far from what they seem. Fifteen years later, academic Sam Gaddis needs money. When a journalist friend asks for his help researching a possible sixth member of the notorious Trinity spy ring, Gaddis knows that she's onto a story that could turn his fortunes around. But within hours the journalist is dead, apparently from a heart attack.

Taking over her investigation, Gaddis trails a man who claims to know the truth about Edward Crane. Europe still echoes with decades of deadly disinformation on both sides of the Iron Curtain. And as Gaddis follows a series of leads across the continent, he approaches a shocking revelation – one which will rock the foundations of politics from London to Moscow.