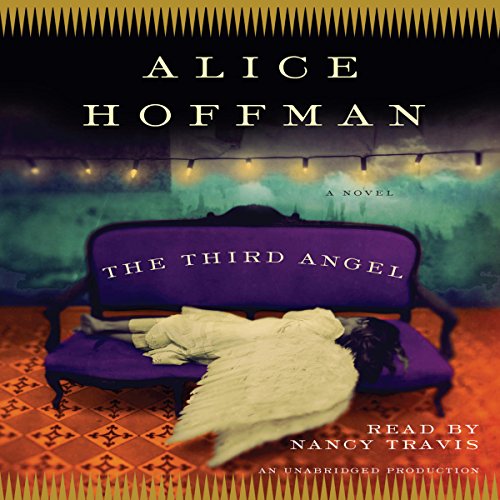 Alice Hoffman is one of our most beloved writers. Here on Earth was an Oprah Book Club selection. Practical Magic and Aquamarine were both best-selling books and Hollywood movies. Her novels have received mention as notable books of the year by the New York Times, Entertainment Weekly, the Los Angeles Times, and People magazine, and her short fiction and nonfiction have appeared in the New York Times, The Boston Globe Magazine, Kenyon Review, Redbook, Architectural Digest, Gourmet, and Self.

Now, in The Third Angel, Hoffman weaves a magical and stunningly original story that charts the lives of three women in love with the wrong men: Headstrong Madeleine Heller finds herself hopelessly attracted to her sister's fiancee. Frieda Lewis, a doctor's daughter and a runaway, becomes the muse of an ill-fated rock star. And beautiful Bryn Evans is set to marry an Englishman while secretly obsessed with her ex-husband.

At the heart of the novel is Lucy Green, who blames herself for a tragic accident she witnessed at the age of 12 and who spends four decades searching for the Third Angel - the angel on earth who will renew her faith.

Brilliantly evoking London's King's Road, Knightsbridge, and Kensington, while moving effortlessly back in time, The Third Angel is a work of startling beauty about the unique, alchemical nature of love.

"Alice Hoffman is my favorite writer." (Jodi Picoult)
"A reader is in good hands with Alice Hoffman, able to count on many pleasures. She is one of our quirkiest and most interesting novelists, and her skills increase with every new book." (Jane Smiley)
"Over the course of writing more than two dozen works of fiction, Hoffman has created her very own form, the heartbreak fairy tale. Her latest and one of her best is...exceptionally well-structured, beguiling, and affecting....Hoffman has transcended her own genre." ( Booklist)