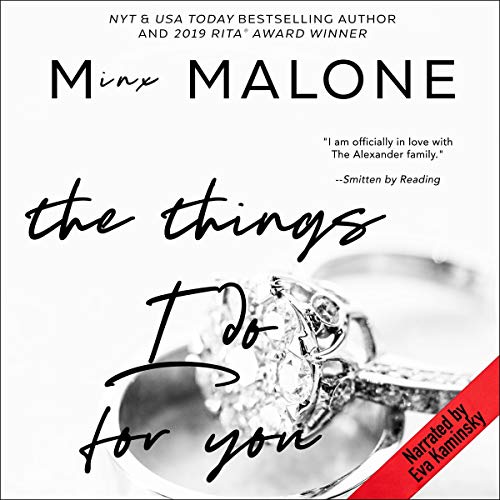 The Things I Do for You

An enemies-to-lovers tale about how far one man will go for the one he can’t help but love. From RITA Award winner, M. Malone.

Nicholas Alexander doesn’t mind being called a playboy. His charm serves him well in business and a beautiful woman is always on his arm. Except the one he’s in love with. As difficult as she is beautiful, he's completely out of his league.

Raina Winters doesn’t believe in love. She's convinced it's a scam created by greeting card companies to sell flowers and chocolate. So when she’s dumped right before her wedding, she’s more upset about losing the one thing she wanted from marriage. A baby.

When Nick learns about Raina’s dilemma, his first instinct is to leave her hanging like she left him after their steamy one-night stand. But he finally has something Raina needs, so he offers her a deal. He’ll give her a baby if she gives him something he desires just as much.

Warning: This book contains encounters with a drunken Elvis, pushy mamas, tabloid shenanigans, several occurrences of bad cooking and hot sex between two people who aren't even sure they like each other. Just saying....

Das sagen andere Hörer zu The Things I Do for You

This is a really wonderful book. It complements the first, yet at the same time, the two MCs are very much their own characters. Again, M. Malone has managed to create a wonderful story around two very different, yet alike people who need some soul searching and a loving, supportive family to get things right. Lots of hotness in between also!