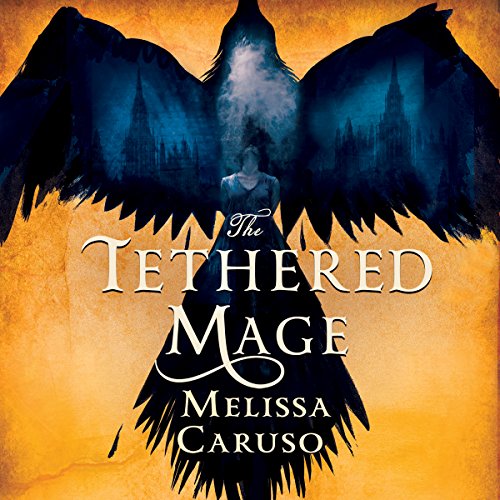 In the Raverran Empire, magic is scarce, and those born with power are strictly controlled - taken as children and conscripted into the Falcon Army. Zaira has lived her life on the streets to avoid this fate, hiding her mage-mark and thieving to survive. But hers is a rare and dangerous magic, one that could threaten the entire empire.

Lady Amalia Cornaro was never meant to be a Falconer. Heiress and scholar, she was born into a treacherous world of political machinations. But fate has bound the heir and the mage. And as war looms on the horizon, a single spark could turn their city into a pyre.

Set in a rich world of political intrigue and dangerous magic, The Tethered Mage is a spellbinding debut from a major new talent.

"Charming, intelligent, fast-moving, beautifully atmospheric." (Genevieve Cogman, author of The Invisible Library)
" The Tethered Mage spins two captivating tales: a battle of wills between a feisty heroine and her bonded warlock, and a battle of wits between an empire and its rivals. Stuffed with intrigue, romance, and betrayal, this is a scrumptious read." (Vic James, author of Gilded Cage)
"Intricate and enticing as silk brocade. Caruso's heroine is a strong, intelligent young woman in a beguiling, beautifully evoked Renaissance world of high politics, courtly intrigue, love and loyalty - and fire warlocks." (Anna Smith Spark, author of The Court of Broken Knives)

The main character annoyed me

It is a well written story, a nice world building and it is not like you have to force yourself to listen/read until the end. However, the whole patriotic theme pervading the story just is not my cup of tea, and I don’t like the message I heard out of this book.
The female main character annoyed me completely, not getting tired of defining herself and justifying her decisions by phrases like „I am the Cornaro heir“, „I am the daughter of Raverra“, „I am the loyal daughter of the Serene City“ or „I am the loyal daughter of the empire“ all through the story. In my opinion she is supporting an oppressive system, and even though she is trying to prevent it, she is ready to burn a whole city out of duty to the empire if commanded. The fact that she decides to „remain unattached for political purposes“, not even by force of her mother but her own choice, thereby again backing up the oppressing rules of monarchy, also wins her no favors from me. If you choose power, why not choose to fight for your love with that power as well?
I guess if you are a fan of books about political intrigues, this is the perfect book. But it’s just not for me.

Cleverly drafted story, colourful and believable characters and a lovely idea of magic. I went directly on with book number two!