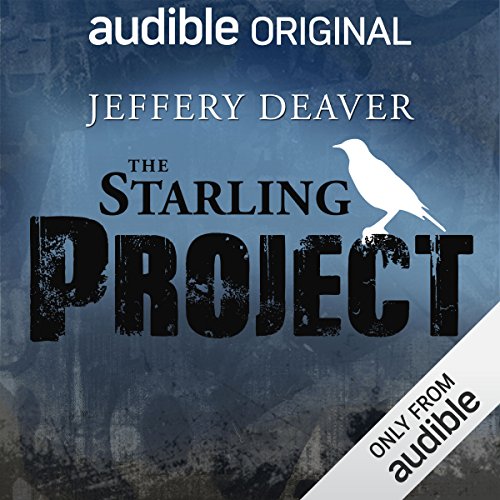 An aborted raid targeting a major arms dealer. A hostage standoff at a bank that may not be what it seems. A plot to spring a former African dictator from prison. What is the threat that connects them all? And just who is the mysterious mastermind, The Starling? From Mexico to Washington - from London to Marseille to Prague - war crimes investigator Harold Middleton and his team of Volunteers risk their lives to follow the trail of clues. But how can they stop The Starling - when he always seems one step ahead?

With more than 80 speaking roles and state-of-the-art sound and music design, The Starling Project is an immersive listening experience written by a master of the thriller

Alfred Molina ("Harold Middleton") has won acclaim for his memorable roles in the movies, on TV, and on the stage, receiving both Emmy and Tony Award nominations. Molina made his film debut in Raiders of the Lost Ark. Since then, he's played such diverse characters as the mayor in Chocolat, and the evil Doc Ock in Spider-Man 2.

The cast of The Starling Project also includes:

Previous Harold Middleton thrillers include The Chopin Manuscript, winner of the Audio Publishers Association's Audiobook of the Year Award, and The Copper Bracelet.

"With his smooth vocal presence, Alfred Molina embodies Middleton's confidence and continental charm as he leads an outstanding ensemble of 30 actors playing 80 speaking roles in this high-velocity thriller.... Slip on a pair of headphones to fully appreciate every detail in this carnival ride for the ears."( AudioFile)

Starts with lots of suspense but slows down a bit

Thought the first chapter was awesome, but the rest was much less suspenseful. Nevertheless, the great performances make it an enjoyable audiobook.