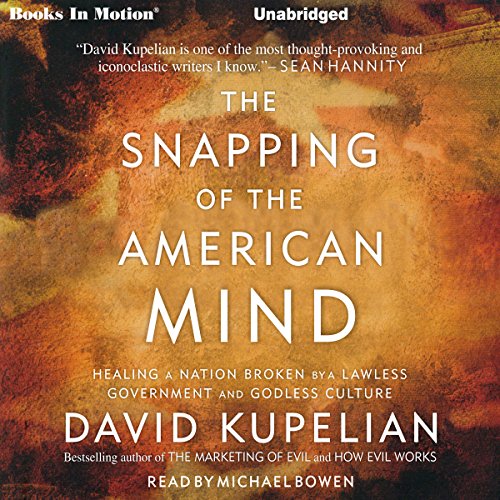 The Snapping of the American Mind

The Snapping of the American Mind

Government openly defies the law, Christians are prosecuted as criminals, children "transition" to the opposite sex, the president supports our enemies - and 130 million Americans depend on mind-altering substances just to get through life. Turbocharged by the Obama presidency, long-coalescing forces of the political and cultural Left are bringing about their much-heralded "fundamental transformation of America". That much everyone knows. But this revolution is also causing a fundamental transformation of Americans - in profoundly negative ways.

In The Snapping of the American Mind, veteran journalist and best-selling author David Kupelian shows how the progressive Left - which today dominates America's key institutions, from the news and entertainment media, to education, to government itself - is accomplishing much more than just enlarging government, redistributing wealth, and de-Christianizing the culture. With the Left's wild celebration of sexual anarchy, its intimidating culture of political correctness, and its incomprehension of the fundamental sacredness of human life, it is also, whether intentionally or not, promoting widespread dependency, debauchery, family breakdown, crime, corruption, addiction, despair, and suicide.

Surveying this growing chaos in American society, Kupelian exposes both the utopian revolutionaries and their extraordinary methods that have turned America's most cherished values literally upside down - to the point that madness is celebrated and normality demonized.