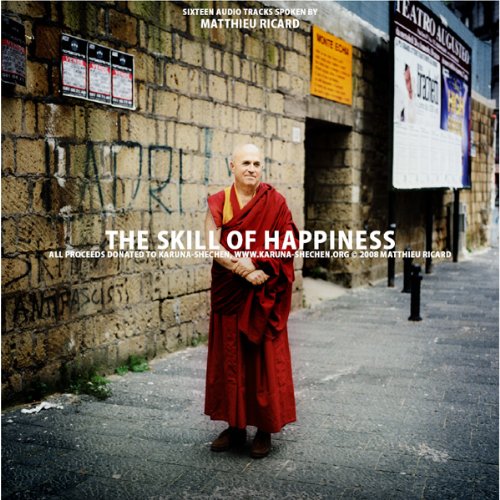 The Skill of Happiness

The Skill of Happiness

"By happiness I mean here a deep sense of flourishing that arises from an exceptionally healthy mind. This is not a mere pleasurable feeling, a fleeting emotion, or a mood, but an optimal state of being. Happiness is also a way of interpreting the world, since while it may be difficult to change the world, it is always possible to change the way we look at it" Matthieu Ricard

Matthieu Ricard was born in Paris in 1946, the son of the late Jean-Francois Revel, a well-know French philosopher and the painter of Yahne le Toumlin. In 1967 he traveled to India for the first time where he met great Tibetan spiritual masters. After completing his doctoral thesis in molecular genetics in 1972, Mattieu decided to forsake his scientific career at the Institut Pasteur and to concentrate on the practice of Tibetan Buddhism. Matthieu is deeply engaged in research on the effect of mind training on the brain. Since 1989 he is the French interpreter for HH the Dalai Lama. Matthieu is also a well-known photographer as well as the author of many books, amongst them, Happiness: A guide to developing life's most important skill (Atlantic Books, 2003). The royalties of his books are entirely donated to humanitarian projects in Asia, via Karuna-Shechen. Matthieu lives in Shechen Monastery in Nepal. www.matthieuricard.org

All the proceeds are donated to Karuna-Shechen, a charitable not for profit association founded by Matthieu Ricard. Karuna means compassion in Sanskrit and is the same name of an area in Eastern Tibet. In Tibet, Nepal and India, Karuna-Shechen has built and maintains sixteen medical clinics in which 100,000 patients are treated yearly, more than half of them for free. It has builty twelve schools, including one for one thousand six hundred children, three homes for the elderly and ten bridges. Karuna is run by a dedicated group of volunteers and has kept its overhead expenses to less than 2% of ...