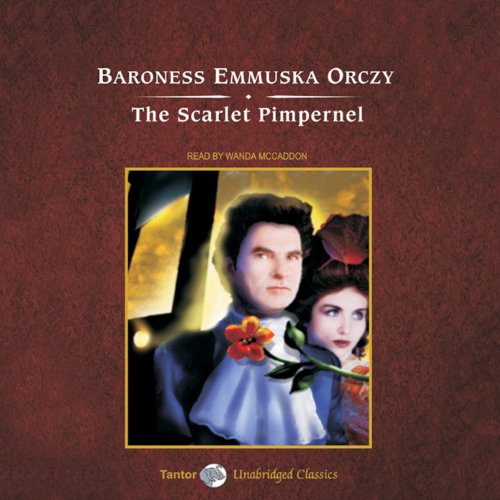 The hero of Baroness Emmuska Orczy’s 1905 novel, The Scarlet Pimpernel is a dashing playboy who saves people from the guillotine in 18th-century France.

The aristocrat Sir Percy hides his identity as a swashbuckling hero from the public by pretending to be a dandy. Meanwhile, he is aided in his daring deeds by a group of aristocrats known as the League of the Scarlet Pimpernel (Percy leaves a drawing of the red flower at the scenes of his heroism). As the story unfolds, Percy’s estranged wife, who does not know his secret identity, needs help saving her own brother from execution.

In her energetic performance, Wanda McCaddon’s genteel accent picks up speed and intensity during moments of tension and action.

In the year 1792, Sir Percy and Lady Marguerite Blakeney are the darlings of British society---he is known as one of the wealthiest men in England and a dimwit; she is French, a stunning former actress, and "the cleverest woman in Europe"---and they find themselves at the center of a deadly political intrigue. The Reign of Terror controls France, and every day aristocrats in Paris fall victim to Madame la Guillotine. Only one man can rescue them---the Scarlet Pimpernel, a master of disguise who leaves a calling card bearing only a signature red flower.

As the fascinating connection between the Blakeneys and this mysterious hero is revealed, they are forced to choose between love and loyalty in order to avoid the French agent Chauvelin, who relentlessly hunts the Scarlet Pimpernel.

The Scarlet Pimpernel is the best-known novel by Baroness Emmuska Orczy, a prolific author of popular fiction and plays. First published in 1905, it pioneered the tale of the masked avenger and paved the way for such future enigmatic swashbucklers as Zorro and the Lone Ranger. Repeatedly adapted for stage and screen---including as a successful Broadway musical---The Scarlet Pimpernel is a relevant and enormously entertaining tale of survival and pluck during times of widespread fear, hypocrisy, and corruption.