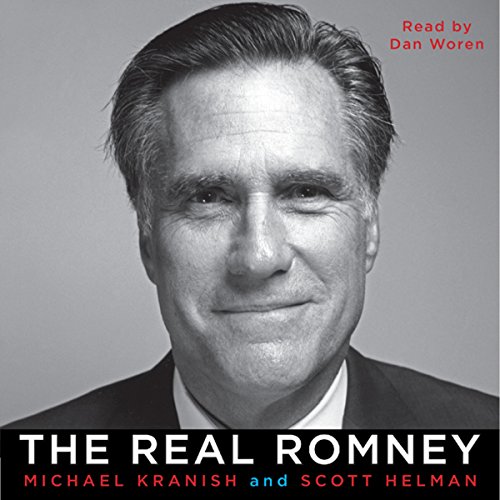 Mitt Romney has masterfully positioned himself as the front-runner for the 2012 Republican presidential nomination. Even though he's become a household name, the former Massachusetts governor remains an enigma to many in America, his character and core convictions elusive, his record little known. Who is the man behind that sweep of dark hair, distinguished white sideburns, and high-wattage smile? He often seems to be two people at once: a savvy politician, and someone who will simply say anything to win. A business visionary, and a calculating dealmaker. A man comfortable in his faith and with family, and one who can have trouble connecting with average voters.

In this definitive, unflinching biography by Boston Globe investigative reporters Michael Kranish and Scott Helman, listeners will finally discover the real Romney. The book explores Romney's personal life, his bond with his wife and how they handled her diagnosis with multiple sclerosis, and his difficult years as a Mormon missionary in France, where a fatal car crash had a profound effect on his path. It also illuminates Romney's privileged upbringing in Bloomfield Hills, Michigan; his rejection of the 1960s protest culture; and his close but complicated relationship with his father.

Based on more than five years of reporting and hundreds of interviews, The Real Romney includes a probing analysis of Romney's tenure at Bain Capital, one of the world's leading private-investment firms, where staggering profits were won through leveraged buyouts that helped create jobs but also destroyed them.

This penetrating portrait offers important new details, too, on Romney's failed Senate race against Ted Kennedy, his role leading the troubled 2002 Winter Olympics, and his championing of universal health care in Massachusetts. Drawing on previously undisclosed campaign memos, emails, and interviews with key players, Kranish and Helman reveal the infighting and disagreement that sunk Romney's 2008 White House bid and his conscious decision to switch tactics for his 2012 run.

In The Real Romney, Kranish and Helman delve searchingly into the psyche of a complex man now at his most critical juncture - the private Romney whom few people see. They show the remarkable lengths to which Romney has gone in order to succeed in politics and business, shrewdly shifting identities as needed, bringing tough-minded strategy to every decision, and always carefully safeguarding his public image. For the first time, readers will gain a full understanding of the kind of man Romney is - the kind of man who may be running their country.

“ The Real Romney pulls together lots of details into a narrative that’s absorbing and fair-minded.” (Michiko Kakutani, The New York Times)
“A timely, balanced new biography. . . . An impressively researched and thought-provoking portrait of a man many Americans may want to know more about in the coming weeks and months.” ( The Boston Globe)
“Balanced and rigorous reporting on Romney’s life and career. . . . The authors are especially good on his close relationship with his father, a three-term Michigan governor who unsuccessfully ran for president in 1968.” ( USA Today)