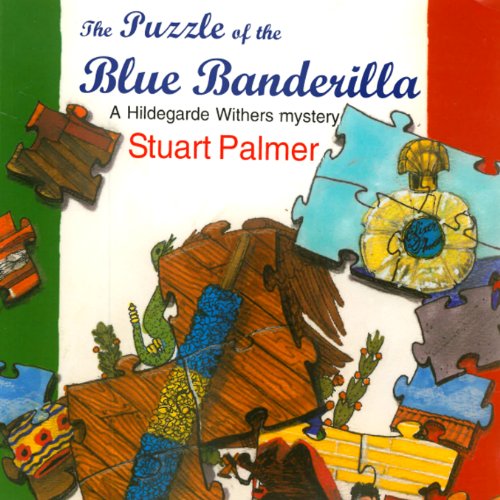 The Puzzle of the Blue Banderilla

Hildegarde Withers heads down Mexico way where the death in the afternoon involves neither a matador nor a bull. Inspector Oscar Piper is off on a junket to Mexico in the summer of 1937 (surrounded by a bunch of Democrats, huffed Miss Withers) when a customs inspector on a train headed for Mexico City sniffs a very potent bottle of cheap perfume and promptly drops dead. Quite naturally, Oscar telegraphs Hildegarde in Manhattan about the perfume and quite naturally Miss Withers packs her bags and heads south of the border, figuring Oscar is out of his depth if he has to rely on deductive reasoning rather than a rubber hose. Why any of the occupants of the train should want to kill a harmless Mexican customs inspector is so puzzling that everyone assumes that the real intended victim is a self-made rich american woman who seemingly has rededicated her life to shopping. Her husband ought to be the prime suspect but he seems devoted to her, although he was spotted giving cash to a pretty young redhead when he thought no one was looking. Then there were the two American fast buck artists who figured they could get rich buying up all the gasoline-powered generators in Mexico on the eve of a strike by utility workers. They looked especially guilty when their shady, double-crossing associate - a somewhat accomplished ladies' man - becomes the second person to die. A blue banderilla, usually used to slow bulls down, is driven through his back during a Sunday afternoon bullfight in Mexico City. Miss Withers borrows a technique from Sherlock Holmes himself to show that a banderilla makes for a lousy murder weapon, a conclusion also reached by a rather odd young Mexican man whose English seems to come and go. First published in 1937, this lighthearted mystery displays all the charm that made Miss Withers Anthony Boucher's favorite female sleuth as well as a favorite of moviegoers during the early days of the talkies.