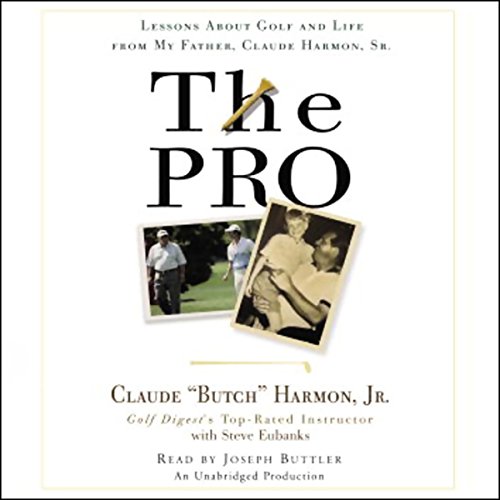 Butch Harmon is the world's number one golf coach. He taught Tiger Woods through one of the greatest stretches of victories in golf history (and, perhaps even more conspicuously, did not teach Tiger Woods following his unprecedented run), as well as superstars like Greg Norman, Adam Scott, Fred Couples, Darren Clarke, Natalie Gulbis, and Davis Love III. How did he become such a legendary teacher and mentor? The answer is simple: He learned from watching his father.

The Harmons are the First Family of golf, and Claude Harmon, Sr., was the greatest of them all. His skill as a player, an innovator, a teacher, a devoted father, a loyal friend, and a peer of giants such as Ben Hogan has gone largely unappreciated by all but those who knew him best. In this book by his son, he finally gets his due. In The Pro, Butch Harmon paints a compelling portrait of an era in sports before the emergence of big media and bigger money, and shows how the lessons he learned about life and golf at his father's knee made him the man he is today.

The Pro is both a family and a golf memoir, as well as an inside look at what it takes to teach the Tigers of the world. It describes how Butch and his brothers, who are also teachers, transfer their father's unique wit, wisdom, and philosophy to the next generation of golfers. Sometimes their advice relates to the game, sometimes they simply offer words of encouragement and motivation, sometimes they make pointed criticisms intended to shock their students into focus, and sometimes they try to impart simple advice about "walking around through life". The Harmon brothers are teachers who share a special quality: All of their lessons are passed down from their father.

This is a portrait of one extraordinary family and the game that will carry their legacy for years to come.

Insights to the game - very motivating

This is a very entertaining book - got a lot of new ideas and learned a lot from it. Like the idea of practicing for the last 9 holes of a tournament.

The stories of his dad, the Tiger Woods insights are great.

From a personal perspective it was good to listen to someone who is talking very open to his feelings of a father.